What Voltaire did differently

Voltaire’s Essai sur les mœurs was ostensibly a response to a Discours sur l’histoire universelle by Jacques-Bénigne Bossuet, published in 1681. Later in life, Voltaire became more vocal in his criticism of Bossuet’s history, writing to Burigny in 1761 that it was more of a ‘particular history of three or four nations, that he calls universal’ (histoire particulière de trois ou quatre nations, qu’il appelle universelle), and then offering the backhanded compliment that the work is ‘of a genius full of imagination’ (d’un génie plein d’imagination), implying that much of it has been fabricated.[1] Most of all, he took against Bossuet’s narrative that centred the Christian God and his chosen people to the detriment of other civilisations and cultures, along with his use of Divine Providence to explain how various events came to pass. 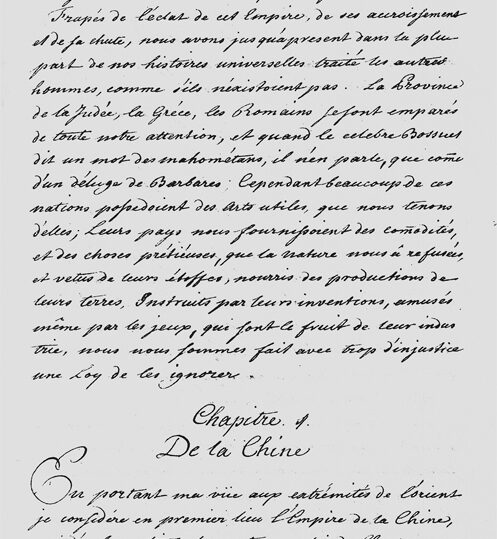 A quick look at the opening paragraphs of Chapter One of both authors’ universal histories makes clear the difference in tone and intent. Bossuet begins:

‘The first era presents you initially with a great spectacle: God who creates heaven and earth by his word, and who makes man in his image. That is where Moses, the most ancient of historians, the most sublime of philosophers, and the wisest of legislators, begins. He makes this the foundation of his history as well as his doctrine and his laws.’

Voltaire, on the other hand, offers the following:

‘The Chinese Empire was consequently vaster than that of Charlemagne, especially since it comprised Korea and Tunquin, provinces that were then tributaries of China. Its size was around thirty degrees in longitude and twenty-four in latitude.’ 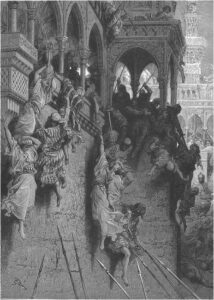 The 1098 massacre of Antioch, one of the many crimes of the First Crusade described by Voltaire. Engraving by the nineteenth-century artist Gustave Doré.

Voltaire makes his iconoclastic intentions clear right from the off by asserting that the Chinese Empire was not only older than its Christian equivalent, but larger too. Historical (and mathematical) fact takes the place of Bossuet’s Creationism. Elsewhere, in his chapter on the First Crusade he condemns the Christians who organised and participated in what he describes as ‘butchery’ of Muslims, Jews and even other Christians in the name of religious fanaticism. Voltaire’s trenchant criticism of Christianity and its historical exploits was controversial to say the least but should not be taken as a disdain for religion in general. He is fairly praising of Islam, describing its adherents as comparatively tolerant, and, in his chapter on the Incas, even goes so far as to say that religion is an essential characteristic of a civilised people.  What he strongly objects to is organised religion being used as a vehicle for intolerance and fanaticism, or otherwise to cloud people’s natural capacity for reason with fundamentalism.

This is one of many examples where Voltaire’s narrative is coloured with its author’s personal judgements, something very unusual for the genre. The Voltairean je is pronounced: this is just as much a work of history as it is an opinion piece. The philosophe positions himself as a critical observer who recounts historical events while passing judgement and extracting a philosophical lesson from the past.

See also: Robert Darnton’s article on using Voltaire’s tactics to deal with the fanaticism and lies of Donald Trump: ‘To deal with Trump, look to Voltaire’.