The Complete works of Voltaire are complete – in 205 volumes!

The Voltaire Foundation has just brought to a successful conclusion its ground-breaking work on the 205 volumes of the Complete Works of Voltaire, the first ever full scholarly edition of this Enlightenment author. The project has been running for over 50 years, and has involved over 200 international collaborators. Voltaire wrote over 2,000 works, many of them unknown or only partially known until now. The Foundation came to Oxford in 1976, following a bequest by the visionary bibliographer and Voltaire scholar Theodore Besterman, and the Complete Works of Voltaire, originally begun in the 1960s, have been its flagship project ever since.

As a research institute in Enlightenment studies, the Voltaire Foundation has attracted major grants from the Mellon Foundation, the Leverhulme Trust and, more recently, the Polonsky and Astra Foundations. In addition, the Complete Works of Voltaire project has received financial support and endorsement from the British Academy, the Académie française, the Académie royale de Belgique, and the Union Académique Internationale.

With all 205 volumes now completed, the Voltaire Foundation is ready for its next challenge as it steps forward with far-reaching plans to transform itself into a new cutting-edge digital hub for the humanities in Oxford. The Voltaire Foundation will pivot to a strong focus on digital research led by its ambitious drive not only to digitise its entire collection, but also to forge ever stronger ties with other leading institutions across Europe in order to share knowledge, understanding and best practice. As we move to the next phase of the Voltaire Foundation’s development into a centre for digital humanities, we are attracting interest from scholars who want to undertake doctoral and postdoctoral research posts, and contribute to the scholarly research programme of the Voltaire Lab. 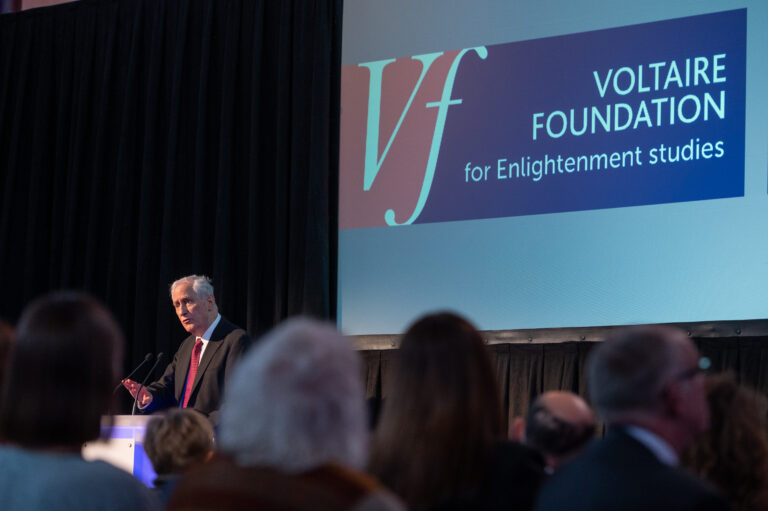 The Voltaire Foundation celebrated these exciting developments at the Bodleian on 17th March. The Vice-Chancellor welcomed guests at the Sheldonian Theatre, and introduced a short documentary film on the making of the Œuvres complètes de Voltaire: Editing Voltaire. Nicholas Cronk, director of the Voltaire Foundation, then introduced Professor Robert Darnton, the leading Enlightenment historian, who gave a lecture ‘Theatricality and Violence in Paris, 1788’ (see the link Celebrating the Complete Works of Voltaire. After drinks in the Blackwell Hall of the Weston Library, there was a dinner celebrating the many contributors to the project, held in the Divinity School, in the presence of the Chancellor and the French Ambassador, H.E. Madame Catherine Colonna.

Further celebratory events will follow: a lecture on 26 May at the British Academy in London, an academic conference about the new Oxford edition of Voltaire, to be held in Paris, 9-10 June, followed by a week-long ‘Festival of Voltaire’ being organised in Paris in November this year.

To find out more please visit the website of the Voltaire Foundation: https://www.voltaire.ox.ac.uk/events/