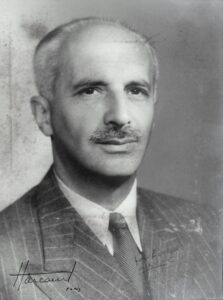 The Foundation was founded by Theodore Besterman (1904–1976), for whom Voltaire was ‘the apostle of freedom, reason and justice’. (Read more about Theodore Besterman in this personal memoir, by Tristram Besterman, or in Giles Barber’s short biography.) Following Besterman’s death, the Foundation was vested permanently in the University of Oxford; we are therefore celebrating more than fourty years in the city. We are currently located at 99 Banbury Road, in Central North Oxford.

For Besterman, Voltaire was the apostle of freedom, reason and justice, to whom he would readily devote the rest of his life.

The nature of that commitment is spelt out in specific terms. Besterman wanted, not ‘just another museum’ but rather ‘to found a centre of research devoted to the great man’.3 Besterman had the resources necessary to realise his dream. The specific aims were threefold – a critical edition of the Œuvres complètes; the creation of a review titled, after the first number,4 Studies on Voltaire and the eighteenth century (or SVEC); and from 1965, Jean-Jacques Rousseau, Correspondance complète, edited by Ralph Leigh.

The original idea of a complete edition of Voltaire’s works seems to have risen from a joint initiative by W. H. Barber and O. R. Taylor. Well aware of the deficiencies of the classic Moland edition (1877-1885), they had in mind only a reliable text.

However, when they took the project to Besterman, his entrepreneurial enthusiasm was quickly aroused. Their modest proposal was soon transformed into a thorough-going critical edition with extensive scholarly apparatus, set out in a provisional table of contents covering the whole scheme in 146 volumes (subsequently enlarged to 205 volumes by the time of its completion). Another basic principle was also agreed. The edition would follow chronological lines. In that way, the evolution of Voltaire’s thought would be more readily discerned. 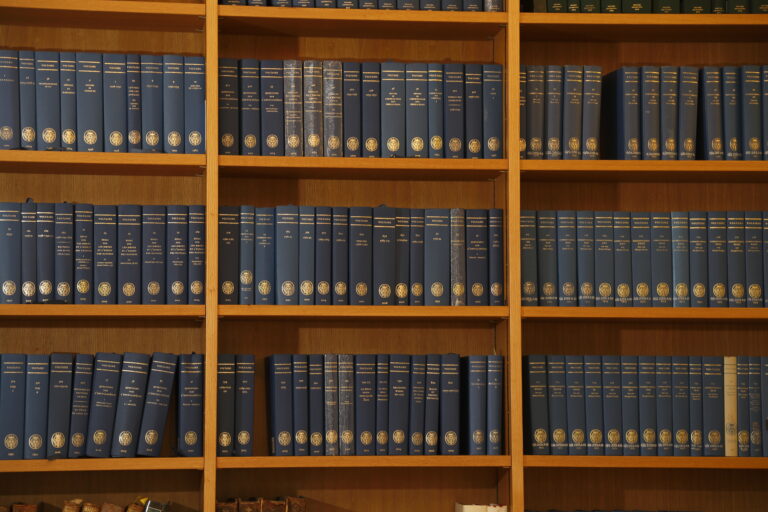 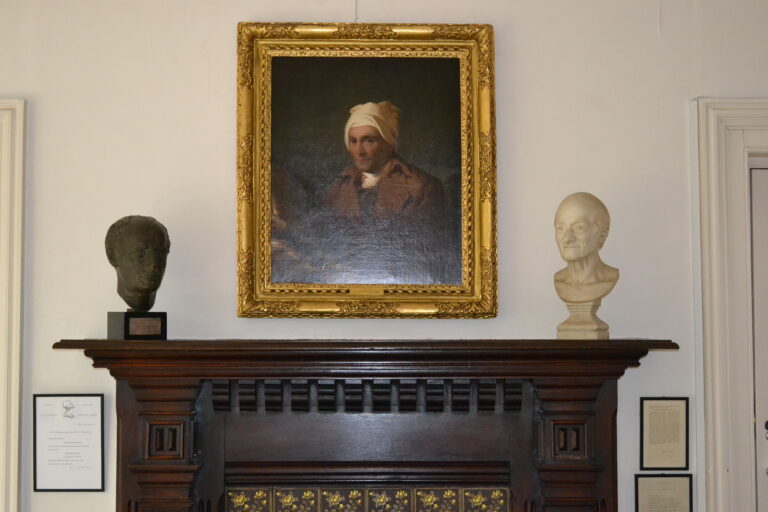 Studies on Voltaire and the eighteenth century (SVEC)

SVEC was from the first a bilingual publication covering all aspects of the Enlightenment the world over. It has long been established as a centre of excellence in its field, and many of its publications have become epochal. To name but a few: André-Michel Rousseau, L’Angleterre et Voltaire, vol.145-47 (1976); Christiane Mervaud, Voltaire et Frédéric: une dramaturgie des Lumières, vol.234 (1985); Chantal Grell, Le Dix- huitième siècle et l’Antiquité en France, vol.330-31 (1985) are outstanding in their respective domains. In addition, SVEC has carried in summary form the proceedings of the quadrennial Congresses, making the Foundation the technical Secretariat for ISECS (the International Society for Eighteenth-Century Studies). Now renamed Oxford University Studies in the Enlightenment (published in partnership with Liverpool University Press), the series publishes twelve volumes a year, which gives some idea of the scale of academic work from the world over that issues from the Voltaire Foundation.

Robert Wokler has recounted in enthralling fashion the partnership which Besterman, Voltaire’s disciple, established with Ralph Leigh, a devotee of Rousseau.5 Out of this relationship emerged what Wokler rightly describes as a ‘monument of erudition’. It will remain one of the most distinguished publications of the Voltaire Foundation due to Leigh’s immaculate scholarship.

Until 1971, Besterman was primus inter pares in research on Voltaire, managing from Geneva a prodigious amount of activity from colleagues throughout the world. But in that year relations with Geneva, never easy, broke down completely. The city closed down the Institut and issued a warrant for Besterman’s arrest. Fortunately for him, he was out of the country, presiding over the third Congress on the Enlightenment in Nancy. A protracted battle ensued, the city claiming that he was in possession of stolen papers, while Besterman steadfastly maintained that they were his own property. Eventually the quarrel died down and the Institut reopened under the unobtrusively diplomatic direction of Charles Wirz. The change in circumstances led Besterman from Switzerland to England and a quiet abode in Thorpe Mandeville, Oxfordshire. Like Voltaire, his master, he had found his own Ferney.

During these final years, Besterman opened discussions with the University of Oxford. These culminated in his naming the university his residuary legatee and arranging for the posthumous transfer of his extensive collection of books and manuscripts, which included many collective editions, to an elegant room in the Taylor Institution (the university centre for modern languages), which has space for 9000 volumes. This was renamed the Voltaire Room, and as such welcomes scholars working on Voltaire and related topics. The Patriarch, who had in person passed through Oxford during his years in England, has returned definitively to the city.

Following Besterman’s death on 10 November 1976, the Voltaire Foundation was vested permanently in the University of Oxford. An Academic Advisory Committee was set up to report to the Besterman Fund Committee, with Robert Shackleton at its head. William Barber took over as General Editor of the Œuvres complètes. Ralph Leigh continued to edit the Rousseau correspondence, while Haydn Mason succeeded as Editor of SVEC. Andrew Brown, formerly Besterman’s secretary in the latter’s final months, became Director of the Foundation. Such radical changes occasioned some inevitable concern, but this was allayed by the arrival at Oxford of the key edition, Candide, by René Pomeau, foremost among Voltaire scholars at that time.

Indeed, the complexities of the will were such that probate was not granted and the estate finally wound up until 1983. However, the University helpfully granted an indemnity that permitted a financial basis for publishing to go ahead. The Advisory Committee played its part, meeting at first on a peripatetic basis. It is curious to reflect that decisions affecting the fortunes of the Foundation were made in London, Cambridge and Bristol!

The number of publications was increasing and the Foundation stood in a unique relationship to the University, often requiring decisions for which there was no precedent. In the most central area of business however, the edition of the Œuvres complètes, it was clear that the rate of publication, only sixteen volumes in a decade, could not inspire confidence that the project would ever be completed. In 1998 a crisis occurred, which led to the resignation of Andrew Brown as director and the departure of Ulla Kölving as associate General Editor of the Œuvres complètes. 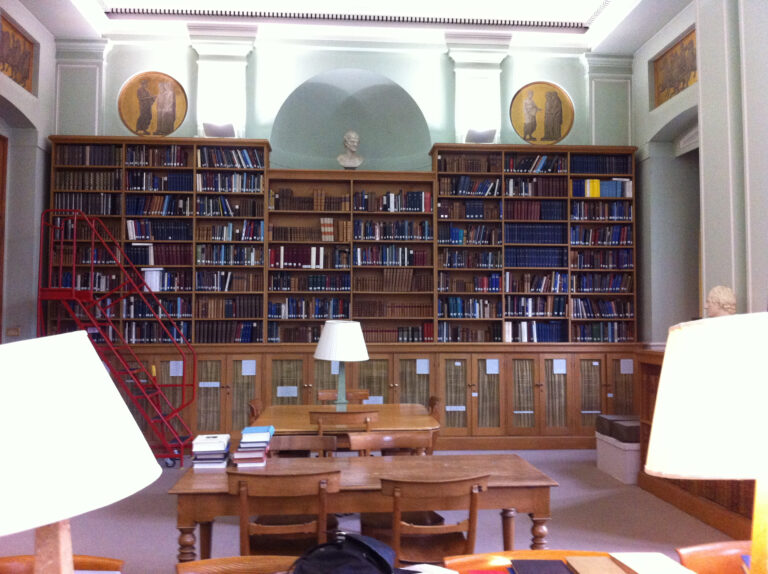 The Voltaire Room at the Taylor Institution Library 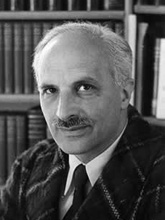 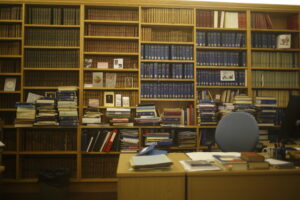 Office of the Director

At a general meeting of eighteenth-century scholars in Paris, Nicholas Cronk affirmed the serious commitment of the Foundation to honour the principles laid down by Besterman and to complete the work which he had inaugurated. The University lent its support, both moral and financial, to this new spirit of endeavour. Haydn Mason was appointed General Editor of the Œuvres complètes, under the Présidents d’honneur W. H. Barber, René Pomeau and later Christiane Mervaud. The Editorial Committee was called upon to play a more active role than formerly. In 2002 Nicholas Cronk became Directeur de l’édition, and oversaw the completion of the project in 2022.

Other projects have also been going forward alongside the Œuvres complètes and Oxford University Studies in the Enlightenment. The Corpus des notes marginales is in the course of publishing the rich material to be found in Voltaire’s annotations on books in his library in St Petersburg. The Electronic Enlightenment project, launched in 2008 and now hosted by the Bodleian Library, includes Voltaire in a far-reaching online collection of works from the Early Modern period. The Voltaire Lab is bringing the Foundation’s research and publishing into the digital era. Not least, the founding father will be permanently remembered in the endowment of the Voltaire Room at the Taylor Institution Library, the VF’s own Besterman Room, and in the annual Besterman Lecture.

4 Volume 1 bore the title Travaux sur Voltaire et le dix-huitième siécle. Besterman never appears to have explained the change of title. One may surmise that his coolness towards the French academic establishment at the time may have had something to do with it.

5 ‘Preparing the definitive edition of the Correspondance de Rousseau’, Rousseau and the eighteenth century, ed. Marian Hobson and others (Oxford, 1992), p.1-21.