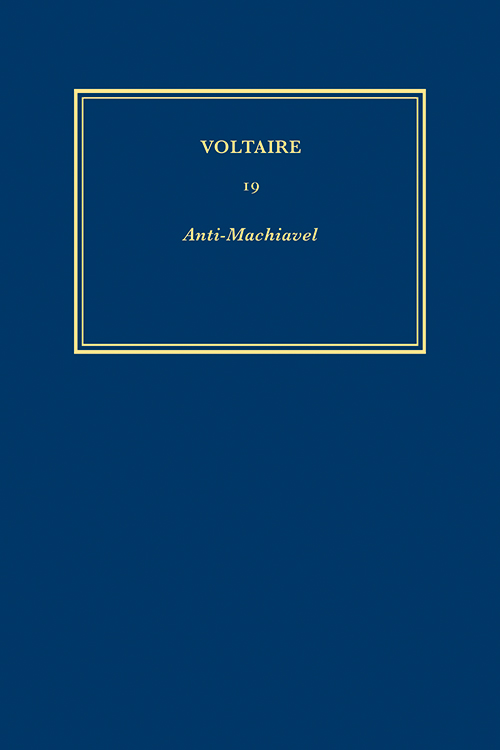 ‘Anti-Machiavel’ is the result of a collaboration between Frederick the Great, King of Prussia, and Voltaire, who edited and expanded upon his patron’s essay. It is as a chapter-by-chapter rebuttal of The Prince, Machiavellianism in general, with emendations and further developments by Voltaire. This edition contains a full introduction, with a detailed publication history and full analysis of this momentous work.

This edition shows the two drafts of the text one after the other (including also the translation by Amelot de La Houssaye of Machiavelli’s Il Principe, on which Frederick II based his own work): scholars will then be able to analyse the parallel between the two versions on the basis of secure textual reference and understand, finally with full knowledge of the facts, which parts of the text can be ascribed to Frederick II and which to Voltaire. The scholar’s work will be enhanced by the rich selection of documents included in the substantial introduction and appendix.

‘If the Anti-Machiavel is not by Voltaire, why should it figure in his complete works? Werner Bahner and Helga Bergmann demonstrate convincingly that the text is the result of a far-reaching collaboration between Voltaire and Fredrick [II of Prussia].’ ‘The scholarship in evidence in the introduction and in the establishment of the texts is impressively thorough. This fine edition makes a valuable contribution to our understanding of Voltaire’s role as a figure in the European Enlightenment.’