Charles-Joseph Natoire and the Académie de France in Rome 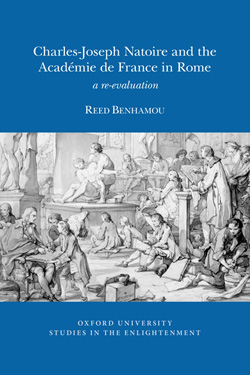 In 1752 Charles-Joseph Natoire, then a highly successful painter, assumed the directorship of the prestigious Académie de France in Rome. Twenty-three years later he was removed from office, criticised as being singularly inept. What was the basis for this condemnation that has been perpetuated by historians ever since? Reed Benhamou’s re-evaluation of Natoire’s life and work at the Académie is the first to weigh the prevailing opinion against the historical record.

The accusations made against Charles-Joseph Natoire were many and varied: that his artistic work was increasingly unworthy of serious study; that he demeaned his students; that he was a religious bigot; that he was a fraudulent book-keeper. Benhamou evaluates these and other charges in the light of contemporary correspondences, critics’ assessment of his work, legal briefs, royal accounts and the parallel experiences of his precursors and successors at the Académie. The director’s role is shown to be multifaceted and no director succeeded in every area. What is arresting is why Natoire was singled out as being uniquely weak, uniquely bigoted, uniquely incompetent. The Charles-Joseph Natoire who emerges from this book differs in nearly every respect from the unflattering portrait promulgated by historians and popular media. His increasingly iconoclastic students rebelled against the traditional qualities valued by the French artistic elite; the Académie went underfunded because of the effects of war and a profligate king, and he was caught between two competing institutional regimes. In this book Reed Benhamou not only unravels the myth and reality surrounding Natoire, but also also sheds light on the workings of the institution he served for nearly a quarter of a century.

‘Benhamou’s book […] offer[s] a riveting account of [Natoire’s] downfall and a perceptive analysis of the difficulties and frustrations that he, like his predecessors, encountered as director’ […] It offers a much needed corrective and makes a convincing case for restoring Natoire’s tarnished reputation […] Benhamou’s meticulously researched, extensively documented study attests to the fundamental value of archival research’.