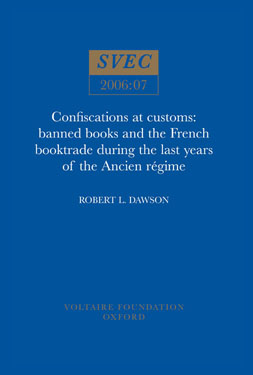 The French Enlightenment takes place against a background of State censorship. During the last decade or so of the Ancien régime, the French government fluctuated considerably regarding its approach to banned books: on the one hand, many were not overtly prohibited but were nonetheless seized; on the other, banned books were often allowed through. The inconsistencies of officials provide revealing insights into the innermost workings of the system on the eve of the Revolution and show the scope of changing mentalities during those crucial years. Beyond the customs records, numerous sources have been exploited in order to clarify these inconsistencies of practice, even as the author analyses archival records relevant to the French booktrade and to works considered dangerous. Confiscations at customs focuses on specific issues concerning banned books and their importation into Paris, including works by Voltaire, Fleuriot de Langle and Raynal, as well as discussing piracies and works published or imported by virtue of the tacit permit. Numerous titles can now be added to the recently published lists of books seized at customs based on a close reading of hitherto unpublished archival sources. Substantial appendices complete the discussion; they range from lists of banned books to unpublished letters concerning Voltaire’s Œuvres. Several other appendices are freely available online at http://uts.cc.texas.edu/~dawson/index.html.
List of illustrations
Foreword
Abbreviations, acronyms, frequently cited sources and special terms
Introduction
1. Inspectors and inspections: preliminary remarks
2. Darnton revisited
i. ‘Fortunately, the syndics […] they kept’
ii. ‘The incidence of customs confiscations therefore provides a final indication of what works circulated most widely in the clandestine book trade’
3. Inside the registers
i. The registers
ii. The records and their significance
iii. Ambiguities
iv. The 1771-1777 confiscations register
v. Further problems
vi. The registers compared
vii. Voltaire and his Œuvres
viii. Fleuriot de Langle
ix. Raynal and the Histoire philosophique
x. Piracies
4. Ancillary archival materials
i. The tacit-permit records and book importations into Paris, 1778-1789
ii. A list of banned books
iii. Edicts and royal decrees
iv. Customs records
v. Circumventing customs
vi. The Registres de la librairie
vii. Selected additional archival sources
5. Conclusion
Appendices
List of secondary sources
Index of works
Index of names, places and themes

[Dawson’s] approach brings vividly to life the actual practices of the customs officers whose job it was to try to stem the flood of prohibited or suspect books engulfing France at this time.

Libraries and the Cultural Record

Dawson has written an excellent scholarly work supported by extensive documentation both in print and online. […] This volume can also serve as a case study in using primary source materials in archival collections. Dawson takes great care to present his methodology in examining two principal registers and in coordinating information from additional multiple sources.

New Perspectives on the Eighteenth-Century

By so thoroughly demonstrating the complexities and interconnections of book censorship and book circulation in 18th-century France, Dawson’s Confiscationsproves to be an excellent resource for scholars.