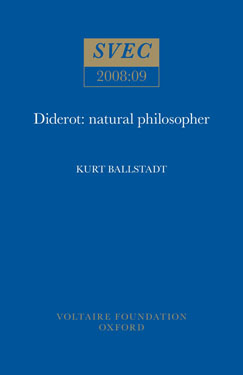 One of the most eclectic and enigmatic of the philosophes, Denis Diderot left an intellectual legacy that has the capacity to stimulate, perplex and even confound. Particularly challenging are his writings on the natural sciences, an area largely neglected by scholars over the past fifty years.

In Diderot: natural philosopher Kurt Ballstadt examines the entirety of Diderot’s scientific works from the Lettre sur les aveugles to the Eléments de physiologie, investigating his fascination with mathematics, experimental physics, chemistry, natural history and medicine, and drawing out the crucial points of contact between these disciplines. Diderot is shown to have a well-constructed philosophy of science and an integrated, sophisticated vision of how the world functions. We are led away from the image of a radical Diderot, champion of disorder, to an analysis of a more systematic thinker whose underlying search for structure characterized both his attitude to the world around him, and the way he wrote about it.

Situating these writings on natural philosophy in the intellectual landscape of the Enlightenment, this book will engage Diderot scholars and historians of eighteenth-century science alike.

This is an excellent study which Diderot scholars will not just want to read but to own. It provides a solid platform for further research into Diderot’s scientific world-view and will remain a valuable resource for years to come.

British Journal of the History of Science, Volume 43/2

Since Ballstadt is also a scrupulous recorder of Diderot’s own words, many of the chapters offer useful potted summaries of Diderot’s writings. These summaries also situate Diderot’s texts alongside the relevant books, personages and intellectual debates that informed his work, and from this perspective too the book can be recommended as a largely accurate and well-researched introduction to Diderot’s scientific ideas.

Divided into chapters on mathematics, experimental physics, chemistry, natural history and medicine, this book documents and analyzes Diderot’s scientific thought. By a happy coincidence this order reflects not only a progression from abstraction to particularity, but also the development of Diderot’s interest in science.