The Enlightenment of age 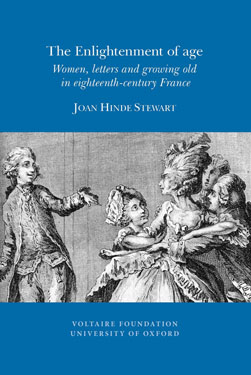 ‘Women seem to be destined solely for our pleasure. When they no longer have that attraction, they have lost everything’ (letter from Diderot to Sophie Volland, 1762). How typical was this view of the ‘older woman’ in the eighteenth century? What was it like for women of intelligence and sensibility to grow old in such a culture?

By studying the correspondences of four prominent women (Françoise de Graffigny, Marie Du Deffand, Marie Riccoboni and Isabelle de Charrière) during their middle and late years, Stewart explores the relation of female aging to respectability, sexuality and power. The author’s focus lies in the physical, emotional and professional well-being of middle-aged and elderly women during a time when all the available dignity of age seemed to belong to men. The ‘repulsiveness’ of growing old was patently a female issue.

One of the most emblematic aspects of these correspondences is the often unrequited love of older women for younger men during a period when the common wisdom denied women the right to any feelings except piety. Stewart juxtaposes their letters with representations of aging women in the period’s fictional and medical literature. She takes up several canonical, mostly male-authored, texts that purvey this common wisdom, and re-reads them with originality and grace.

Through The Enlightenment of age – at once learned, highly personal and entertaining – Stewart speaks to us about the secret lives of older women, and about the ethos of an era.

Joan DeJean, Foreword
Introduction
1. A prescription for eternity
2. Old fairies
3. Menopause and morals
4. Fifteen minutes to fifty
5. What time is it?
6. Romancing Marie
7. Addressing her age
8. Portrait of the artist as an old lady
9. Generations
10. Word salad
Conclusion
Bibliography
Index

Using vivid prose and a distinct sense of humour, Stewart deftly maneuvers between fictional and real portraits of older women while in the processs offering engaging analyses not only of the correspondences but also of novels such as Le paysan parvenu by Marivaux, Liaisons dangereuses by Laclos, and the letters exchanged by the latter and Riccoboni.

The result of long-lasting research efforts and meticulous close readings, Joan Hinde Stewart’s monograph is devoted to the exploration of the fate of aging and elderly women in eighteenth-century France, focusing on the section of society that should, according to the perception at the time, leave said society’s limelight once their prime begins its decline.

‘[Stewart] pursues her argument with a lightness of touch that makes this book both enjoyable and instructive. Indeed, the title of the book and a number of the chapter titles – ‘Fifteen Minutes to Fifty’, ‘What Time Is It?’, ‘Word Salad’- reflect a witticism of style that is pleasing to find in an academic study of such breadth and depth.’