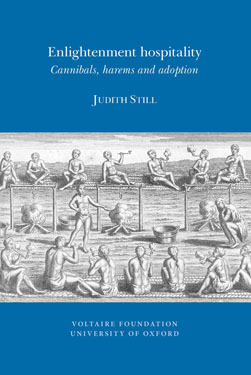 Hospitality, in particular hospitality to strangers, was promoted in the eighteenth century as a universal human virtue, but writing of the period reveals many telling examples of its abuse. Through analysis of encounters across cultural and sexual divides, Judith Still revisits the current debate about the social, moral and political values of the Enlightenment.
Focussing on (in)hospitality in relation to two kinds of exotic Other, Judith Still examines representations of indigenous peoples of the New World, both as hosts and as cannibals, and of the Moslem ‘Oriental’ in Persia and Turkey, associated with both the caravanserai (where travellers rest) and the harem. She also explores very different examples of Europeans as hosts and the practice of ‘adoption’, particularly that of young girls. The position of women in hospitality, hitherto neglected in favour of questions of cultural difference, is central to these analyses, and Still considers the work of women writers alongside more canonical male-authored texts.
In this thought-provoking study, Judith Still uncovers how the Enlightenment rhetoric of openness and hospitality is compromised by self-interest; the questions it raises about attitudes to difference and freedom are equally relevant today.
1. Introducing Enlightenment hospitality
2. The New World: received as gods
3. The New World: eating the other
4. Enlightenment Persia
5. Turkish travels: hospitable harems and good guests
6. The other as guest: the special case of adoption and sexual predation
7. Revolution and rights
Concluding questions: now and then
Bibliography
Index

‘Still has a way of rendering her enthusiasm consistently contagious over the course of this encyclopedic study […] Still draws and builds on her prior work and deftly weaves analysis of gendered, sexual, and economic questions into her syntheses of themes.’

‘In addition to being historical and critical, Still’s argument is methodological […] she does not repeat the rhetorical triangle of self-critique or the self-justifying comparison so common to Enlightenment discourses on hospitality. It is this that makes her study thickly post-colonial and feminist: instead of engaging in a guilt-driven Enlightenment critique, Still disentangles Enlightenment voices and power relations and reveals who is allowed to speak and who is silenced in the operating mechanisms of Enlightenment (in) hospitality.’