tensions and convergences in eighteen-century art, history and literature 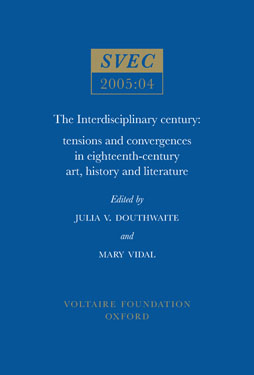 Judging by most contemporary accounts, the virtues of cross-disciplinary research, teaching and scholarship are above reproach. Conference organisers announce with pride that ‘l’interdisciplinarité a porté ses fruits’; governments and universities sponsor ever-growing numbers of interdisciplinary research teams. Such activity is especially pertinent to eighteenth-century studies. The Republic of Letters inspired scholars, scientists, artists, and writers to engage in spirited, multilingual and long-term correspondence with colleagues throughout Europe. As many contributors to this timely and provocative volume argue, a certain kind of interdisciplinarity is required for any consideration of eighteenth-century topics.

But what impact has this enthusiasm for interdisciplinarity had on our understanding of objects, monuments, texts, and events of the past? Born of an intense series of debates, this volume takes on current controversies with unflinching honesty. Contributors address questions of theory and practice. Does interdisciplinary investigation carry any meaningful challenge to the disciplines themselves, or are we merely trading one kind of evidence for another? What institutional constraints work against such research and teaching? Is interdisciplinarity a pressing preoccupation of scholars in France and the UK, as it is in the US?

The introduction provides a critical history of interdisciplinarity and outlines the key tensions of university life as experienced by students and scholars in the US, the UK and France. Position papers provide state-of-the-field analyses – some invigorating or even utopian, others darkly brooding. Case studies present examples of contemporary work, showing what might happen when a literary scholar confronts a pornographer’s battles, when an art historian takes on an ‘undisciplined’ object‚ or, perhaps most intriguing, when a practising attorney evaluates ‘legal’ approaches to literature.

List of illustrations
Acknowledgements
Julia V. Douthwaite and Mary Vidal, Introduction: the history and current polemics of interdisciplinary work
I. Knowledge networks and ‘undisciplined objects’
Daniel Rosenberg, We have never been interdisciplinary: encyclopedism and etymology in the eighteenth century and since
James D. Herbert, Looking at Louis XIV looking: the unity of the disciplines under an absolute monarch
Isabelle Michel-Evrard, Les ressources interdisciplinaires de l’étude de l’illustration au dix-huitième siècle
Mimi Hellman, Object lessons: French decorative art as a model for interdisciplinarity
II. Rescuing the trivial
Mary Sheriff, Disciplinary problems in the history of art, or what to do with rococo queens
Jennifer Milam, Play between disciplines: the problem of the ludic in rococo art and Enlightenment culture
III. The politics of interdisciplinarity
Joan B. Landes, Trespassing: notes from the boundaries
Mark Ledbury, But is it art history? Some thoughts on disciplines, tensions and territories in studies of eighteenth-century art
IV. Defamiliarising the familiar
Gregory S. Brown, Beaumarchais, social experience and literary figures in eighteenth-century public life
Amy S. Wyngaard, Literary texts or historical documents? Revisiting the debates on Rétif de La Bretonne
V. Literature and law
Joan I. Schwarz, Evidence and analysis for interdisciplinary research in eighteenth-century law and literature
Miriam L. Wallace, ‘Doing’ history, or what I learned from the 1794 London Treason Trials
Lisa Jane Graham, Scandal: law, literature and morality in the early Enlightenment
VI. Centres and margins, on past and future
Laurent Loty, Pour l’indisciplinarité
David Andress, Can culture really explain politics? Interdisciplinary historiography, enlightenment and revolution
Joan DeJean, On becoming a historian…
Summaries
List of works cited
Index