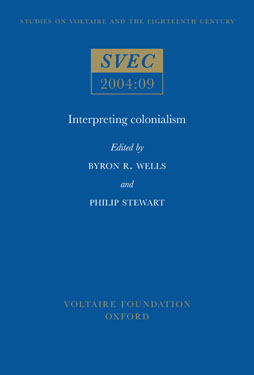 This volume has its origins in an international seminar where eighteen scholars representing a number of academic fields were invited to consider the eighteenth-century colonial enterprise from a more global and interdisciplinary perspective. Among the issues that arose then, and that are more fully elaborated here, are: the nature and goals of the many colonial expeditions that were undertaken at the time; the manners and means in which these were carried out; the differences between them; and the similarities that they shared. Relying on a variety of sources that include historical archives, literary texts, travel journals, visual and material artefacts and critical studies, the authors explore eighteenth-century colonialism as it was practised and manifested around the world: Europe, Africa, the Americas, the South Pacific, and Asia. What emerges from their essays is the image of a Eurocentric practice with global implications whose themes, despite the diversity existing among the preponderant colonial powers, were oft repeated.

As a result, the essays presented here are grouped into four sub-headings – Representations, Mercantilism, Religion and ideology, and Slavery – each of which is integral to an understanding of colonial and post-colonial theories and of their respective consequences and interpretations. The motives of colonisers, as well as their critics, were both multiple and shared during the eighteenth century. These engendered complex sets of arguments – philosophical, political, economic, and social – which the contributors to this volume examine in detail in such disparate geo-political areas as Mexico and Thailand, Senegal and China.

The voyage across methodologies, histories, lands, and cultures will be as eye-opening yet bumpy as any such excursion around the colonial world must be. Among the many virtues of the contributions is that they move well beyond schematic depictions of colonial power, taking various approaches to the dynamics of colonial relations and examining the agency, and even at times the complicity, of colonialized subjects. Taken as a whole, the impressive undertaking may be considered under the rubric of “critical global studies”, as Felicity Nussbaum calls the project informing The Global Eighteenth Century (2003), a collection to which Interpreting Colonialism provides a welcome and worthy complement.