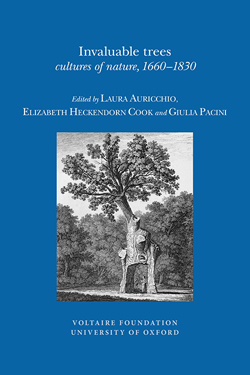 Trees and tree products have long been central to human life and culture, taking on intensified significance during the long eighteenth century. As basic raw material they were vital economic resources, objects of international diplomatic and commercial exchange, and key features in local economies. In an age of ongoing deforestation, both individuals and public entities grappled with the complex issues of how and why trees mattered.

In this interdisciplinary volume, contributors build on recent research in environmental history, literary and material culture, and postcolonial studies to develop new readings of the ways trees were valued in the eighteenth century. They trace changes in early modern theories of resource management and ecology across European and North American landscapes, and show how different and sometimes contradictory practices were caught up in shifting conceptions of nature, social identity, physical health and moral wellbeing.

The collection ˝focuses on the actual tree, apprehended in its full materiality˝ in lieu of the metaphorical or symbolic treatment of trees, which sets it apart from earlier works of criticism on trees in the eighteenth century

The plurality of the Enlightenment is a key organizing theme: the editors situate the volume within a growing literature that sees vitalism and sentiment in Enlightenment thought alongside detachment and classification.