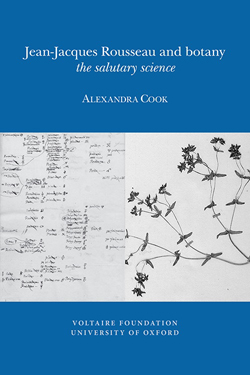 Universally studied for his writings on politics, philosophy, morality and education, Jean-Jacques Rousseau’s interest in botany has been deemed a mere curiosity. In this radical reinterpretation Alexandra Cook demonstrates how this seemingly marginal activity shaped and was shaped by his philosophy.

Rousseau’s botanical project was informed by his belief in the superiority of nature over artifice – a principle illustrated in his famous Lettres élémentaires sur la botanique, in which he used the ‘natural method’ of plant classification, a ground-breaking system which would eventually triumph over rival systems. Based on a wide range of original sources, Cook traces and re-assesses Rousseau’s botanical education, the complex history of his plant collections, and his participation in scientific correspondence networks. She also reveals how his botanical writings were manipulated and misinterpreted following his death.

In this richly illustrated study, supported by inventories of his botanical library, correspondents and herbaria, Cook provides an unprecedented insight into Rousseau’s study and practice of botany. Not simply an intellectual pursuit, it became part of his physical and psychological self-discipline, a precursor to today’s ‘environmental therapy’.

The British Journal for the History of Science

Alexandra Cook’s Jean-Jacques Rousseau and botany: the salutary science is a major and decisive addition to the vast field of Rousseau studies and studies of eighteenth-century botany. It shows how his dedication to botany for a significant period of his life had implications for his emotional, intellectual and social life and how he was part of larger and dynamic processes in accessing and ordering the knowledge of nature.