Lessing and the German Enlightenment 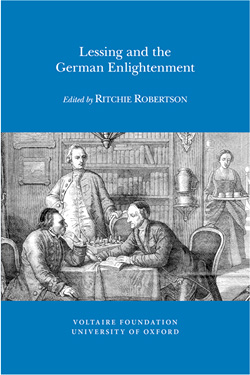 Primarily celebrated for his dramatic works Minna von Barnhelm, Emilia Galotti and Nathan der Weise, Gotthold Ephraim Lessing’s diverse pursuits extended far beyond the stage. From incisive journalism to innovative reflections on poetry, aesthetics and theology, his wide-ranging intellectual interests place him firmly alongside contemporary polymaths such as Diderot. In this extensive study an international team of experts explores Lessing’s contribution to both the German and broader European Enlightenments to reveal:
• the energy and acuity of his critical writing, which made him an exemplar for subsequent German authors;
• the originality and lasting significance of Laocoon, his groundbreaking treatise on aesthetics, which distinguished the domains of poetry and the visual arts, and is still a major point of reference;
• how his reflections on theology and the Bible helped shape a view of Christianity as a historical phenomenon without absolute truth;
• how his Enlightenment curiosity and open-mindedness were nourished by an interest in natural science, particularly astronomy;
• how activities such as his adaptation of English domestic tragedy and his translations of Diderot’s theatrical writings placed him at the heart of the pan- European Enlightenment.
Ritchie Robertson, Preface
Note on references
H. B. Nisbet, Lessing’s achievement
Romira Worvill, Lessing and the French Enlightenment
Alexander Košenina and Ritchie Robertson, Lessing as journalist and controversialist
Richard E. Schade, Lessing’s poetry
John T. Hamilton, Reception, gratitude and obligation: Lessing and the classical tradition
Jason Gaiger, The contemporaneity of Lessing’s aesthetics
Thomas Martinec, Lessing’s dramatic theory
Francis Lamport, ‘Solcher Väter giebt es keinen mehr’: paternal authority in Lessing’s tragedies
K. F. Hilliard, Lessing’s comedies
Jonathan M. Hess, Lessing and German–Jewish culture: a reappraisal
Adam Sutcliffe, Lessing and toleration
David Hill, Enlightenment as a historical process: Ernst und Falk and Die Erziehung des Menschengeschlechts
Christoph Bultmann, Lessing and the Bible
Karl S. Guthke, Lessing and science
A chronology of the life and major works of Gotthold Ephraim Lessing
Summaries
List of contributors
Bibliography
Index

For both students and scholars, this volume offers an informative and up-to-date overview of the most essential research topics in this area and poses questions that open up opportunities for further research and development.