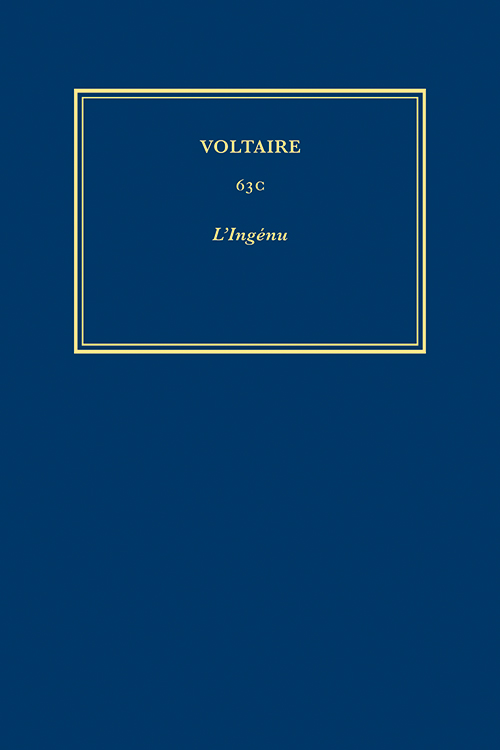 First published in 1767, Voltaire’s satirical tale L’Ingénu was an immediate success. It was, Voltaire observed to his publisher, even better than Candide (in that it was more realistic), and readers from Voltaire’s era through to the present day have accounted it one of his most entertaining works.

Imitating a popular literary convention, the conte charts the introduction of an outsider into French society: a Huron who has arrived in Brittany. In the Huron’s ensuing clashes with the church and the political administration, the naive gaze of this ‘uncivilized’ observer exposes absurdity and hypocrisy.

Setting the story in the late seventeenth century, Voltaire offers a criticism of life under Louis XIV as well as an allegory of eighteenth-century religious intolerance. Composed during the period of Voltaire’s campaign against injustice – of the sort perpetrated on Calas, Sirven and La Barre – L’Ingénu may be seen as portraying the type of the innocent individual persecuted by the state.

Francis goes into great detail in dealing with Voltaire’s sources, dividing these sections or chapters, usefully, into background (Brittany and Huronia), events (1689, 1767, and autobiographical allusions), debates (the religious issue, the savage and his education, the question of evil), and forms, concluding his presentation with the publication and reception of the novel and – standard in the Foundation’s monumental edition of the complete works – sections on editions in Voltaire’s lifetime, translations, and his edition’s principles. In every case, Francis betrays wide-ranging and judicious scholarship (including mastery of the Voltaire corpus), serene weighing of the evidence, measured argumentation, and enlightening annotation, all of which make this the most scholarly and insightful edition of the work ever published.

The [volume] under review bear[s] continuing witness to the high standards of scholarship, commentary and production that characterize this enormous undertaking. In the first, Richard A. Francis provides an edition of L’Ingénu to rival Pomeau’s authoritative Candide (volume 48). The textual scholarship is punctilious and includes one important correction (pp.137-38) to Van den Heuvel and Deloffre’s Pléiade edition. The introduction, concerned almost exclusively with sources and reception, provides a judicious and extremely thorough account of the historical and literary contexts from which this conte arose and with which it so deftly and entertainingly engages.