Money and political economy in the Enlightenment 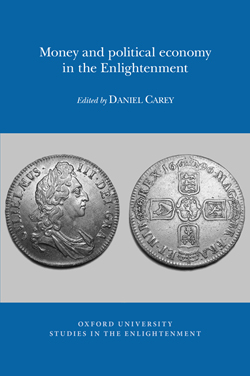 The development of political economy as a philosophical preoccupation constitutes a defining feature of the Enlightenment, but no consensual agreement on this issue was formed in the period. In this book contributors reassess the conflicting views on money, trade, banking, and the role of the State in the work of leading figures such as Locke, Davenant, Toland, Berkeley and Smith, and Smith’s critics in revolutionary France.

Key events, from the Recoinage crisis in the 1690s to the South Sea Bubble in the 1720s and the consequences of the French Revolution, sharpened the need for a more dynamic conception of economic forces in the midst of the Financial Revolution. Political economy emerged as a disruptive force, challenging philosophers to debate and define unstable phenomena in a new climate of expanding credit, innovation in money form, political change and international competition. In Money and political economy in the Enlightenment contributors investigate received critical assumptions about what was progressive and what was backward-looking, and reconsider traditional attempts to periodise the Enlightenment. Major questions explored include:
• the impact of economic and political crises on philosophy;
• transitions from mercantilist to ‘classical’ analyses of the market;
• the challenge of reviving ancient republicanism on the foundations of a modern commercial system, with its inherent social inequalities.

Through reading this book we realize that money was not only considered a vehicle for the facilitation of exchange, but that major philosophers like Filmer, Locke, Toland, Berkeley, Hume, and Smith, saw money as a multilayered mechanism that played a key role in the constitution of culture, politics, morality, and justice. The volume contains both careful contextualization of oft-debated issues, as well as a number of bold and ambitious claims that are likely to spark new conversations.

‘[in this book] there is a tight connection between Enlightenment ideas and the historical context in which they were originally offered […] almost without exception, the scholarship is of high quality.’