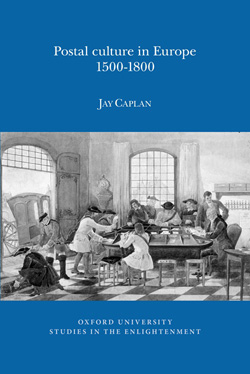 During the early modern period the public postal systems became central pillars of the emerging public sphere. Despite the importance of the post in the transformation of communication, commerce and culture, little has been known about the functioning of the post or how it affected the lives of its users and their societies. In Postal culture in Europe, 1500-1800, Jay Caplan provides the first historical and cultural analysis of the practical conditions of letter-exchange at the dawn of the modern age.

Caplan opens his analysis by exploring the economic, political, social and existential interests that were invested in the postal service, and traces the history of the three main European postal systems of the era, the Thurn and Taxis, the French Royal Post and the British Post Office. He then explores how the post worked, from the folding and sealing of letters to their collection, sorting, and transportation. Beyond providing service to the general public, these systems also furnished early modern states with substantial revenue and effective surveillance tools in the form of the Black Cabinets or Black Chambers. Caplan explains how postal services highlighted the tension between state power and the emerging concept of the free individual, with rights to private communication outside the public sphere. Postal systems therefore affected how letter writers and readers conceived and expressed themselves as individuals, which the author demonstrates through an examination of the correspondence of Voltaire and Rousseau, not merely as texts but as communicative acts.

Ultimately, Jay Caplan provides readers with both a comprehensive overview of the changes wrought by the newly-public postal system – from the sounds that one heard to the perception of time and distance – and a thought provoking account of the expectations and desires that have led to our culture of instant communication.
Introduction
1. A brief history of Western European postal services in the
early modern period
2. Signed, sealed and delivered
3. Surveillance and secrecy: the Black Cabinets
4. Voltaire’s post: 1760-1770
5. Rousseau: vox clamantis
6. A postal world
Bibliography
Index

‘Jay Caplan’s book brings a unique and important contribution to a growing body of work on the culture of letter writing and cultural importance of European postal systems and networks’.

‘Postal culture is a fascinating, highly readable, well-documented study, with a surprising reach, and a brisk pace that makes learning from it a real pleasure.’