The Profession of sculpture in the Paris ‘Académie’ 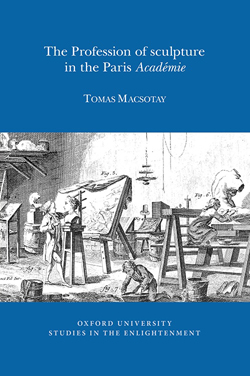 The profession of sculpture was transformed during the eighteenth century as the creation and appreciation of art became increasingly associated with social interaction. Central to this transformation was the esteemed yet controversial body, the Académie royale de peinture et de sculpture.

In this richly illustrated book, Tomas Macsotay focuses on the sculptor’s life at the Académie, analysing the protocols that dictated the production of academic art. Arguing that these procedures were modelled on the artist’s study journey to Rome, Macsotay discusses the close links between working practices introduced at the Académie and new notions of academic community and personal sensibility. He explores the bodily form of the morceau de réception on which the election of new members depended, and how this shaped the development of academic ideas and practices. Macsotay also reconsiders the early revolutionary years, where outside events exacerbated tensions between personal autonomy and institutional authority.

The Profession of sculpture in the Paris Académie underscores the moral and aesthetic divide separating modern interpretations of sculpture based on notions of the individual artistic persona, and eighteenth-century notions of sociable production. The result is a book which takes sculpture outside the national arena, and re-focuses attention on its more subjective role, a narrative of intimate life in a modern world.

Introduction
1. The impossible originality of Falconet’s Milon
2. Sculptors’ morceaux between style and method
3. From shop floor to academic gallery
4. Guidance and autonomy: the role of Rome
5. Vleughels’s drawing sculptors
6. The order of figures: inert and moving
Epilogue. Of lions and cats: sociability and sculpture
Bibliography
Index

‘The wealth of materials in these chapters leads the reader to question the Académie’s unresolvable conflict between its self-designated status a a distiller of a national canon through the pedagogy of the visual exemplum and the ultimate necessirty to resort to discursive forms of knowledge to maintain such a canon, namely, to critical speaking and writing about art.’