Remapping the rise of the European novel 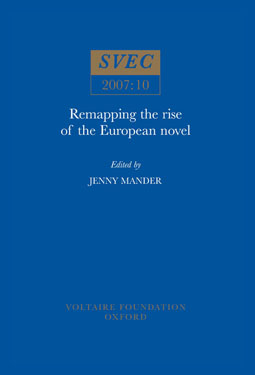 Fifty years on from Ian Watt’s pioneering study, The Rise of the novel, Jenny Mander brings together the work of bibliographers, literary scholars and socio-cultural historians to present a new European perspective on the development of the genre. Remapping the rise of the European novel investigates how prose fiction between 1500 and 1800 was simultaneously shaped by the development of the nation-state and by multiple crossings of geographical, cultural and linguistic boundaries.

Drawing on evidence from France, Spain, Italy, Germany, Russia, Greece, as well as England, authors argue for a more inclusive history that identifies origins in different times and places, and trace how they interact or diverge.

Through detailed case studies and bibliometric analyses, the authors explore the importance of continental and colonial travel in fashioning early-modern novelistic discourse, and examine how translation helps to disseminate ‘novel’ fictions. Discussion of popularity and pleasure – topics often excluded from traditional histories of the novel– sheds new light on the ways we think about the relationship between literary and social history.

List of figures and illustrations
List of tables
Acknowledgements
Jenny Mander, Introduction
I. Plus ultra? Time, travel and translation
Andrew Hadfield, When was the first English novel and what does it tell us?
Margaret A. Doody, The representation of consciousness in the ancient novel
Diana de Armas Wilson, Of pilgrims and polyglots: Heliodorus, Cervantes and Defoe
B. W. Ife and R. T. C. Goodwin, ‘Many expert narrators’: history and fiction in the Spanish chronicles of the New World
Nandini Das, Feeding an appetite for ‘monstrous newfangledness’: exploration and errancy in Robert Greene’s cony-catching tales
II. Bibliometrics, generic identity and translation
Angus Martin, Traffic in translations: French fiction and the European novel 1701-1750
James Raven, The material contours of the English novel 1750-1830
Anne J. Cruz, The pícaro meets Don Quixote: the Spanish picaresque and the origins of the modern novel
Alan Paterson, Translation in the formation of genre: Edmund Spenser and Gabriel Harvey testify
Trudi Darby, Translation and transculturation: the 1619 English translation of Persiles y Sigismunda
III. Novel and nation
Kate Williams, Passion in translation: translation and the development of the novel in early-eighteenth-century England
Nathalie Ferrand, The map of reading in la Romancie
Andrew Kahn, The rise of the Russian novel and the problem of romance
Mónica Bolufer, Poisonous plants or schools of virtue? The second ‘rise’ of the novel in eighteenth-century Spain
Ann Hallamore Caesar, History or prehistory? Recent revisions in the eighteenth-century novel in Italy
Roderick Beaton, The Greek novel and the rise of the European genre
IV. Popular pleasures
Ros Ballaster, Orienting the ‘English’ novel: the shaping genius of the eastern tale in eighteenth-century Britain
Lise Andries, Was the novel a popular genre in early modern France?
Karen O’Brien, Siblings or rivals: fiction and narrative history in eighteenth-century Britain
Eric Méchoulan, Civility and pleasure: a few hypotheses on the rise of the novel in the early modern period
John Richetti, The sex/gender system and the eighteenth-century English woman’s novel
Michael Minden, Elisa oder das Weib wie es sein sollte: two kinds of reading pleasure in the consumption of the eighteenth-century German novel
Summaries
List of works cited
Index

After reading this excellent book, scholars will feel that they have considerably broadened their knowledge of European literature.

Jenny Mander sees her volume “only” as a kind of starting point on a voyage of discovery, providing several striking individual observations and raising a number of new questions. But it seems to me that one of its important conclusions is that translations may have played a larger role in the emergence of the modern European novel than previously thought.