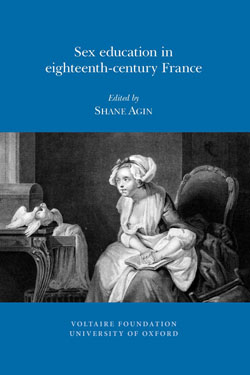 Did ‘sex education’ actually exist in eighteenth-century France? Shaped by competing currents of religious dogma, atheist materialism and bourgeois morality, eighteenth-century France marked the beginning of what Michel Foucault called ‘une fermentation discursive’ on matters related to sex. But when we consult the educational theorists or philosophes of the time for their opinions on preparing a young person for life as a sexual being, we are met with a telling silence. Did an Enlightenment era that dared to make sex an object of discourse also dare to make it an object of pedagogy?

Sex education in eighteenth-century France brings together specialists from a range of disciplines to address these issues. Using a wide variety of literary, historical, religious and pedagogical sources, contributors explore for the first time the nexus between sex and instruction. Although these two categories were publicly kept distinct, writers were effectively shaping attitudes and behaviours. Unraveling the complex system of rules and codes through which knowledge about sex was communicated, contributors uncover a new dimension in the practice of education in the eighteenth century.

This well-structured book has three sections, each examining contributions to sex education in a different domain. It guides readers through its topic like a pyramid, with a comprehensive foundation followed by an ever more narrow focus in subsequent sections.