daring to know too much 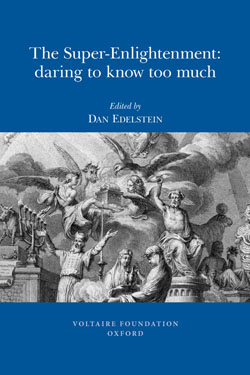 Historians of eighteenth-century thought have implied a clear distinction between mystical or occult writing, often termed ‘illuminist’, and better-known forms of Enlightenment thinking and culture. But where are the boundaries of ‘enlightened’ human understanding?
This is the question posed by contributors to this volume, who put forward a completely new way of configuring these seemingly antithetical currents of thought, and identify a grey area that binds the two, a ‘Super-Enlightenment’. Through articles exploring the social, religious, artistic, political and scientific dimensions of the Super-Enlightenment, contributors demonstrate the co-existence of apparent opposites: the enlightened and the esoteric, empiricism and imagination, history and myth, the secretive and the public, mysticism and science. The Enlightenment can no longer be seen as a sturdy, homogeneous movement defined by certain core beliefs, but one which oscillates between opposing poles in its social practices, historiography and even its epistemology: between daring to know, and daring to know too much.
Dan Edelstein, Introduction to the Super-Enlightenment

I. What limits of understanding?

Peter Reill, The hermetic imagination in the high and late Enlightenment

Jessica Riskin, Mr Machine and the imperial me

II. The arts of knowing

Anthony Vidler, For the love of architecture: Claude-Nicolas Ledoux and the Hypnerotomachia

Fabienne Moore, The poetry of the Super-Enlightenment: the theories and practices of Cazotte, Chassaignon, Mercier, Saint-Martin and Bonneville

Natalie Bayer, What do you seek from us? Wisdom? Virtue? Enlightenment? Inventing a Masonic science of man in Russia

Dan Edelstein, The Egyptian French Revolution: antiquarianism, Freemasonry and the mythology of nature

Tili Boon Cuillé, From myth to religion in Ossian’s France

By turning their attention to figures sometimes pejoratively referred to as ‘illuminés’, the essays of this volume shed a new light on eighteenth-century thought, revalorizing often marginalized thinkers, revealing the complementarity of Super-Enlightenment and Enlightenment, and thus enhancing our understanding of the particular complexity of this period in the history of ideas.

The Super Enlightenment is most significant and valuable to Enlightenment studies for the opportunity it gives modern-day academics to reflect upon the intellectual and philosophical geography of the period, but also to reconsider how they study it. It opens the field to dialogue, allowing us to ask questions we may not have otherwise considered.