Opening the Lettres sur les Anglais for the first time, readers may be surprised to find themselves reading four successive letters devoted entirely to the small religious sect of the Quakers – more letters than Voltaire devotes to any other topic. His justification? He believed ‘that the doctrine and the history of so extraordinary a people were worthy the attention of the curious’. So what was it about the Quakers that Voltaire found so extraordinary?

We soon see that it is largely because they go against the grain – against the grain of established churches and of social norms. Voltaire’s nameless ‘eminent Quaker’, a semi-fictional character cobbled together from encounters with two real people, neither removes his hat nor inclines his head, despite Voltaire’s florid introduction and courtly bow. He uses the familiar ‘tu’, in contrast to Voltaire’s formal ‘vous’. He informs the mock-befuddled Frenchman that Quakers neither take communion, nor baptise their children, nor fight in wars: ‘we are neither wolves, tigers, nor mastiffs, but men and Christians’, he says. They have no priests, and at Quaker prayer meetings anyone is allowed to speak at any time – ‘even’ women, we are told… 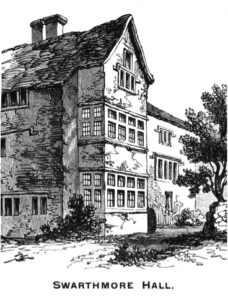 By the time Voltaire was writing about them, the Quakers had existed for scarcely 80 years. As he recounts himself in Letters III and IV, the Quakers trace their modern origins to the middle of the seventeenth century, and the Leicester-born preacher George Fox. Believing himself divinely inspired, in the 1640s Fox began a career of itinerant preaching across the north of England, where he came across a radically egalitarian group of Christians, who held non-hierarchical prayer meetings and kept no clergy. This ‘holy mad-man’ in Voltaire’s words was eventually accepted as a leader within the movement, which grew prodigiously when Fox enlisted the help of Margaret Fell, of Swarthmoor Hall in Cumbria (then Lancashire). The movement swelled through the efforts of a group of leaders and preachers known as the ‘Valiant Sixty’ (which included Fox and Fell), who spread the doctrine across the north of England. It soon came to be called the Religious Society of Friends, known as Quakers because members ‘trembled at the word of the Lord’.

Like other dissident sects during the latter half of the seventeenth century, the English Quakers were discriminated against and persecuted. The numbers are staggering: of a maximum estimated population of 60,000, between 1652 and 1689 13,562 Quakers were imprisoned, 152 were deported, and 338 were killed. The 1689 Act of Toleration put an end to this bleak early period, but Quakers were still effectively barred from universities or public service, and they continued to be expected to pay tithes to the Church of England – a demand which they refused.

Voltaire evinces a combination of ridicule and respect for the Quakers in his letters, and this conflicted attitude can be said to have characterised the relationship of English society to the Society of Friends during the eighteenth century. As Voltaire emphasises, the Quakers set themselves apart from society by refusing to take part in common religious and cultural practices, and they notably refused to fight in wars. Yet they were widely trusted and respected in society as fair, decent people who could be counted on to keep their word. It is widely believed that this public perception of Quakers’ trustworthiness, paired with the fact that they could not pursue university, clerical, or political careers, were at the root of their considerable success in business during the eighteenth and nineteenth centuries. This success continued, and Quaker names can be found on supermarket shelves and bank branches to this day: Cadbury’s, Fry’s, Rowntree’s, Lloyd’s, Barclay’s. It is often said that the Quakers ‘sought to do good, and did very well’.

Perhaps more than anything, what Voltaire appreciated about the Quakers was that they illustrated how a group which dissented so radically and steadfastly from ecclesiastical officialdom could exist and thrive in England, and do so alongside countless other sects…

For more on Quaker history: