In Letter XXIV of the Lettres sur les Anglais, Voltaire offers a comparison between the learned societies of England and those of France. His principal interest is London’s Royal Society, which he compares with France’s Académie des Sciences.

The Royal Society was founded by a group of scientifically minded men who had been meeting periodically in Oxford and London since the 1640s to discuss experimental methods and instruments, and to exchange knowledge gained through experimentation. ‘Science’ in the sense in which we use it today was not yet a category of knowledge in its own right. Founding members of the Royal Society like Robert Boyle, who made groundbreaking discoveries in chemistry and physics, and John Wilkins, who made astronomical observations and published on mechanics, considered what they were doing to be a new form of philosophy, with experimentation and observation at its heart. Societies like the Royal Society were instrumental in the development of what we now think of as science. 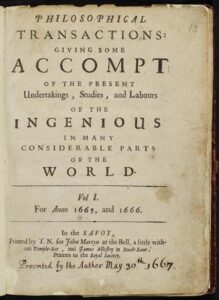 The founding of the Royal Society followed a lecture on 28 November 1660 given by Christopher Wren at Gresham College in London, and the Society received its first royal charter from Charles II in 1662. The purpose of the Society was to conduct experiments and to accumulate and spread knowledge. It began publishing a journal of its proceedings, the Philosophical Transactions, in 1665, and continues to do so to this day. When Voltaire arrived in England, his great hero Newton was its sitting (and at that time longest-serving) president, having been elected to the post in 1703.

Voltaire notes that the Royal Society was founded before France’s Académie des Sciences. This is true, but only just. The Académie was founded in 1666 by Louis XIV’s immensely influential finance minister Jean-Baptiste Colbert, and at first it was simply a regular meeting of scholars to discuss physical and mathematical sciences, but after some time also allowed for members to receive a sizeable royal pension. A major difference between the Royal Society and the Académie was that the latter had been founded by and was maintained as a part of the French state, whereas the Royal Society was a self-governing group of learned enthusiasts.

One of Voltaire’s complaints about the Royal Society is that it made no clear distinction between ‘Literature’ and ‘the Study of Nature’. He objects to the idea of ‘a Dissertation on the Head-dresses of the Roman Ladies’ rubbing shoulders in the same publication ‘with an hundred or more new [mathematical] Curves’. This criticism is not entirely fair, as the vast majority of the Society’s efforts and output were questions of natural science, but Voltaire wishes to see a distinction as existed in France between the Académie Française, primarily concerned with the French language, and the Académie des Sciences. The Académie Française was founded in 1635 by Richelieu with the purpose of giving ‘exact rules to language’ and like the Académie des Sciences had a limited number of seats, with new members elected by the body of other members. Voltaire mentions Swift’s ill-fated project for such a society in England, but also pokes fun at the Académie Française for its publication of the speeches of new members assuming their chairs, because they amount to empty, formalised flattery. 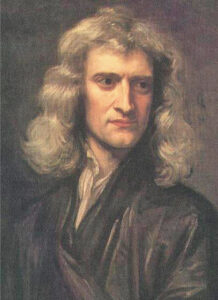 Isaac Newton was one of the earliest Fellows of the Royal Society, elected in 1672; painting by Sir Godfrey Kneller, 1689 (Isaac Newton Institute / The Portsmouth Estate)

More on the Royal Society: