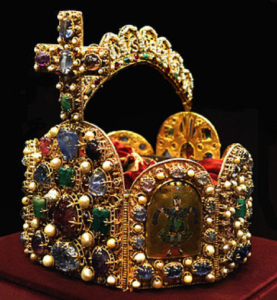 The crown of the Holy Roman Empire, thought to be made either during Otto the Great’s reign or soon after. Held in the Imperial Treasury at the Hofburg Palace (Vienna).

As well as providing a history of the Holy Roman Empire, the Annales de l’Empire dabbles in political theory in its discussion of governance and the concept of the republic. For Voltaire, the republic is a primitive form of government that is closely aligned with human nature and natural right, two phrases he repeats many times when discussing governance. For example, in his article on ‘Patrie’ in the Dictionnaire philosophique, he writes that ‘it is impossible for there to exist a State on Earth that is not at first governed as a republic: it is the natural progress of human nature’ [‘il est impossible qu’il y ait sur la terre un Etat qui ne sout gouverné d’abord en république: c’est la marche naturelle de la nature humaine’] (Œuvres complètes de Voltaire, vol.36, p.412).

We find the kernel of this idea in the Annales where Voltaire paraphrases: ‘Nothing is more in keeping with nature, that all those who have an interest in being well governed should participate in the establishment of a government’ [‘Rien n’est plus conforme à la nature, que tous ceux qui ont intérêt d’être bien gouvernés, concourent à établir un gouvernement’] (ch.11, OCV, vol.44A, p.408).

In the Annales, Voltaire uses the Holy Roman Empire as a case study of the concept of a republic. Early in its timeline, it seems to correspond quite closely with his theoretical republican ideal, its leader elected by a group of regional deputies, clergymen and lords. This process is described in his chapter on the reign of Henry the Fowler, the eleventh emperor (ch.11, OCV, vol.44A, p.407-408). However, Voltaire’s overall view on republics is unoptimistic. Although they might begin with good intentions, championing equality and individual liberty, human nature is a self-destructive phenomenon. The same natural impulses that cause a primitive society to appoint its leaders and form a government will sooner or later drive one of these leaders to abuse their authority and become tyrannical. 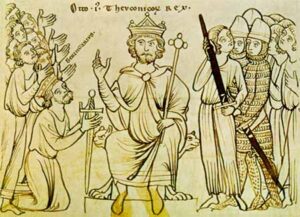 Manuscript depiction (c. 1200) of Otto accepting the surrender of Berengar II of Italy. The headline reads: ‘Otto I Theutonicorum rex’ (‘Otto the First, King of the Germans’).

To exemplify this, we might turn to the reign of Otto the Great (ch.12, OCV, vol.44A, p.417), an ambitious despot who saw himself as Charlemagne’s successor, oppressing Rome and quarrelling with his own people. Voltaire even doubts whether Otto was fairly elected to head the republic, alluding to evidence that the regional deputies were denied their vote.

Voltaire is usually described as a monarchist, but at several points in the Annales he takes a stand against absolute monarchy, praising the principle that leaders should be selected by and held accountable to their subjects and condemning tyrants like Otto. As Otto’s reign demonstrates, personal ambition coupled with absolute authority is poison to any republic.