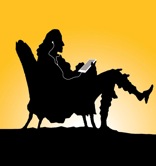 Claire Trévien discussed in an earlier post the Candide iPad app which the Voltaire Foundation has produced in association with the Bibliothèque nationale de France and Orange. There have been over 7000 downloads since January, so if you haven’t seen it yet, take a look – it’s beautiful and free!

At the core of the app is René Pomeau’s critical edition of Candide published by the Voltaire Foundation (OCV, volume 48), but lots more has been added. A guiding idea behind the project was to make the text accessible to teenage readers (for example, by supplying a parallel set of annotations aimed specifically at that group), and to judge by the tweeted and blogged responses, it is succeeding. In what is certainly the best (and shortest) review ever given to a VF publication, one French fan has written that the app is “bien foutue”.

But the app is interesting to readers at all stages. You can listen to Candide as well as read it, and the actor Denis Podalydès gives a beautifully clear and cool reading. It’s great to discover the music of Voltaire’s prose: I find that hearing the text read aloud brings out nuances of humour and irony that I’ve missed in silent reading.

Another special feature of the app are the images of the La Vallière manuscript, which dates from 1758, the year before Candide was published. This manuscript has been well known since the 1950s, when it was discovered by Ira Wade, and for this app, the Bibliothèque de l’Arsenal has made new high-resolution images. It is possible to study in a split screen images of the manuscript alongside the subsequent published version of the text, or to look at the manuscript on a full screen and even to enlarge any part of it.

The quality of the images is amazing: as you enlarge them, you can almost feel the secretary Wagnière writing as Voltaire dictated, and you can experience in close-up the moments when Voltaire in his own hand intervenes or corrects his secretary’s draft. In Chapter 1, we remember how Pangloss is introduced, as a teacher of “la métaphysico-théologo-cosmolonigologie”. In the manuscript, we can see how Voltaire first tried “métaphisico-theolo-cosmolo-méologie”, then changed the last word to “mattologie” – here you can actually catch Voltaire in the process of inventing a new word. In Chapter 4, Candide recalls his love for Cunégonde: “il ne m’a jamais valu qu’un baiser et vingt coups de pied au cul”… When you look at the manuscript, you can see how the words “dans le cu” are added, in Voltaire’s own hand, as an afterthought, squeezed into the right-hand margin. Of course all this information is in the apparatus of the VF edition, but no description, however accurate, quite replaces the experience of looking at the original manucript. Digital images of this quality give us a vivid sense of spying on Voltaire while he is writing. 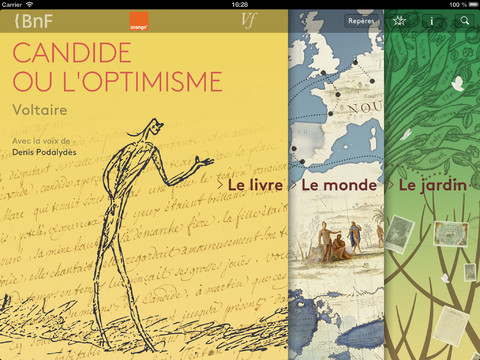