Enlightenment political theory has received a great deal of scholarly attention in recent years as intellectual historians and political theorists have mined the riches of eighteenth-century ideas about human rights, the self, or international law. Surprisingly little of this work, however, has been devoted to the so-called Early Enlightenment, the decades before the eruption of the high Enlightenment at mid-century with the publication of seminal works such as Montesquieu’s The Spirit of the Laws (1748) or Diderot and d’Alembert’s great Encyclopédie (1751- ). Yet, this time was rich with the fermentation of ideas that would make their mark later in the century. 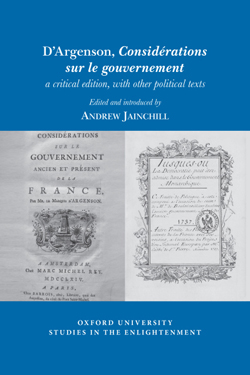 One of the key texts of the early Enlightenment, penned by René-Louis de Voyer de Paulmy, marquis d’Argenson (1694-1757), which circulated clandestinely in manuscript for decades before its posthumous publication as the Considérations sur le gouvernement ancien et présent de la France in 1764, mounted a scathing indictment of the Old Regime social and political order, championed equality as a central moral and political value, and argued for extending democracy within the monarchy. Originally titled ‘Jusqu’où la démocratie peut être admise dans le gouvernement monarchique’ and composed primarily in the 1730s, d’Argenson’s treatise called for the redistribution of land, improving the material circumstances of the peasantry, and establishing municipal magistrates with substantial autonomy. With the establishment of his system, d’Argenson wrote, ‘the kingdom would change face’. Indeed, the abbé de Saint-Pierre, upon reading the manuscript, wrote to d’Argenson that he ‘appears a bit more partial to democracy than to monarchy’, while the fermier général Dupin wrote to d’Argenson that there was an ‘immense distance […] between our current situation and what you propose’. This is the first critical edition of d’Argenson’s treatise, based on four different manuscripts held in archives and libraries in France, and presented here with a selection of d’Argenson’s other political writings that have never been published.

D’Argenson is probably best known to posterity as a chronicler of his time thanks to his widely cited nine-volume Journal et mémoires, one of the most important existing sources on the politics of the 1730s to 1750s, as a member of the short-lived Club de l’Entresol, and for his Notices sur les œuvres de théâtre published in 1966. Among the philosophes, d’Argenson was known, as d’Alembert wrote in the dedication to one of his books, for his ‘breadth of knowledge’, ‘love of the common good’, and for being a ‘philosophe in your sentiments’. His true intellectual passion was ‘the principles of the true science of humanity, those of morality and politics’, as le Beau stated in the eulogy given to the Académie royale des inscriptions et belles-lettres upon d’Argenson’s death.

The depth of d’Argenson’s critique of the social and political order is perhaps more surprising given his status as the scion of a powerful political family. His father was the powerful lieutenant general of police under Louis XIV and then Keeper of the Seals during the Regency, his brother Minister of War, and he himself served a brief tenure as Minister of Foreign Affairs during the War of Austrian Succession. Rousseau commented when citing d’Argenson’s manuscript in the Social Contract, published two years before the Considérations: ‘I have not been able to deny myself the pleasure of occasionally quoting from this manuscript, although it is unknown to the public, in order to honor the memory of a good and illustrious man, who kept even in the Ministry the heart of a good citizen, and views on the government of his country that were sane and right.’ This critical edition of d’Argenson’s Considérations brings to light for the first time those views and, in an introductory essay, situates them within d’Argenson’s full political philosophy and the political and intellectual context of his time.

The above post is reblogged from Liverpool University Press. Andrew Jainchill is the editor of the May Oxford University Studies in the Enlightenment volume, D’Argenson, Considérations sur le gouvernement, a critical edition, with other political texts, which utilises rare manuscripts and previously unstudied archival sources to produce the first critical edition of d’Argenson’s ‘Considérations’.