In 1770 a group of Voltaire’s friends decided over a boozy dinner that a subscription should be started to commission a monumental statue of France’s most famous living writer. The chosen sculptor was Jean-Baptiste Pigalle, the tercentenary of whose birth falls this coming January. Pigalle’s work was widely admired, and he was a favourite of Louis XV, who sent Frederick the Great a marble copy of the sculptor’s Mercure attachant ses talonnières, a work that may seem somewhat bland to modern eyes but was hugely popular at the time. 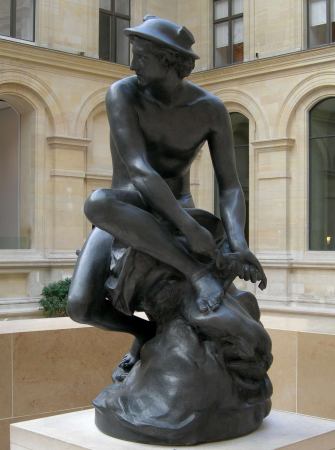 But it was in his portraits that Pigalle showed his originality. Whereas his teacher Jean-Baptiste Lemoyne and Lemoyne’s other famous pupil Jean-Antoine Houdon produced idealised portraits, 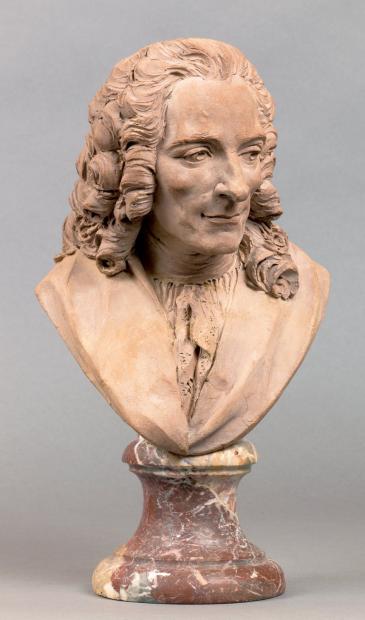 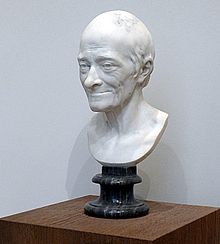 Pigalle offered a more modern realism. His self-portrait in terracotta is remarkable. 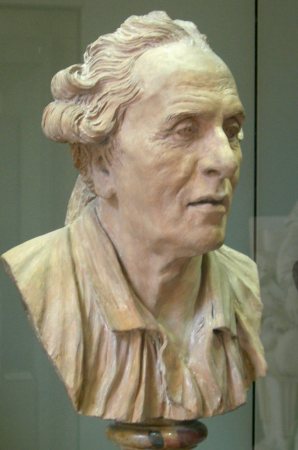 His statue of a naked Voltaire could have been equally striking. He chose to present his subject as a classical nude, but without any idealisation, and there is much to admire in the rendering of the dynamic pose and the naturalism of the anatomy. Voltaire approved the head that Pigalle modelled in the eight days he spent at Ferney (the body was created later using an old soldier as a model), but in the transfer from clay to marble, completed in 1776, the likeness was lost and the head sits awkwardly on the body. Moreover, the decision to depict Voltaire naked had drawn widespread condemnation almost from the start. In the end the work remained in Pigalle’s studio until the early nineteenth century.

volume 71c of the Œuvres complètes published this summer.

In a letter to Mme Necker, who organised the subscription, he feigned surprise but also couldn’t resist getting in a dig at his long-standing enemy Jean-Jacques Rousseau:

A few days later he wrote to Marmontel expressing his unworthiness but also betraying his worry that other enemies would cause problems:

The proposed inscription for the work was ‘A Voltaire vivant’, reflecting the fact that no similar monumental sculpture had ever been commissioned of a living subject, but Voltaire suggested, typically playing on the old story of his bad health, that it should read ‘A Voltaire mourant’ (D16318, 27 April 1770).

When the time came for Pigalle to visit Voltaire to begin the work of creation, he brought with him a letter from D’Alembert penned in high-flown language:

Voltaire wrote a poem, which he called Lettre à Monsieur Pigalle (published in OCV, vol.71c, p.437-39), in which he addresses Pigalle as Phidias and, with unconscious prescience, asks the sculptor:

On Pigalle’s arrival at Ferney Voltaire composed another poem, for Mme Necker, in which he continued the theme:

The project drew contributions from royalty and the stars of the world of literature, including even Jean-Jacques Rousseau, whose two louis Voltaire spitefully refused to accept until his objections were finally worn down by his friends. But it was all in vain. It is not clear if Voltaire ultimately recognised that the sculpture was an artistic failure, but he was certainly aware of the outcry against it at the time. In a letter to Feriol of 24 November 1770 (D16781) he wrote of his play Le Dépositaire (also published in OCV, vol.71c) and the condemnation of it by his perennial enemy Fréron:

On a more positive note, the time that Voltaire spent with Pigalle at Ferney gave the writer the technical information he needed to write his essay Fonte (OCV vol.72), an important stage in his Biblical criticism.