If Voltaire had used Wikipedia…

At the Voltaire Foundation we’ve recently had the opportunity to work with the University of Oxford’s Wikimedian in residence, Dr Martin Poulter. He has helped us to build some new content for our website as well as contributing to our mission to promote the work of Voltaire. In this blog post, he explains a bit more about the project.

To raise awareness of Voltaire as a historian, we used three tools:

As well as holding data about people, publications, and events, Wikidata acts as a cross-reference between the different language versions of Wikipedia, showing which concepts are represented in which languages. By querying Wikidata, we could count how many language versions of Wikipedia had an article on each work by Voltaire. This showed, as expected, a large imbalance: forty languages for Candide versus three for the Essai sur les mœurs, for example. The current number of articles for each work is shown by the size of the bubbles below. 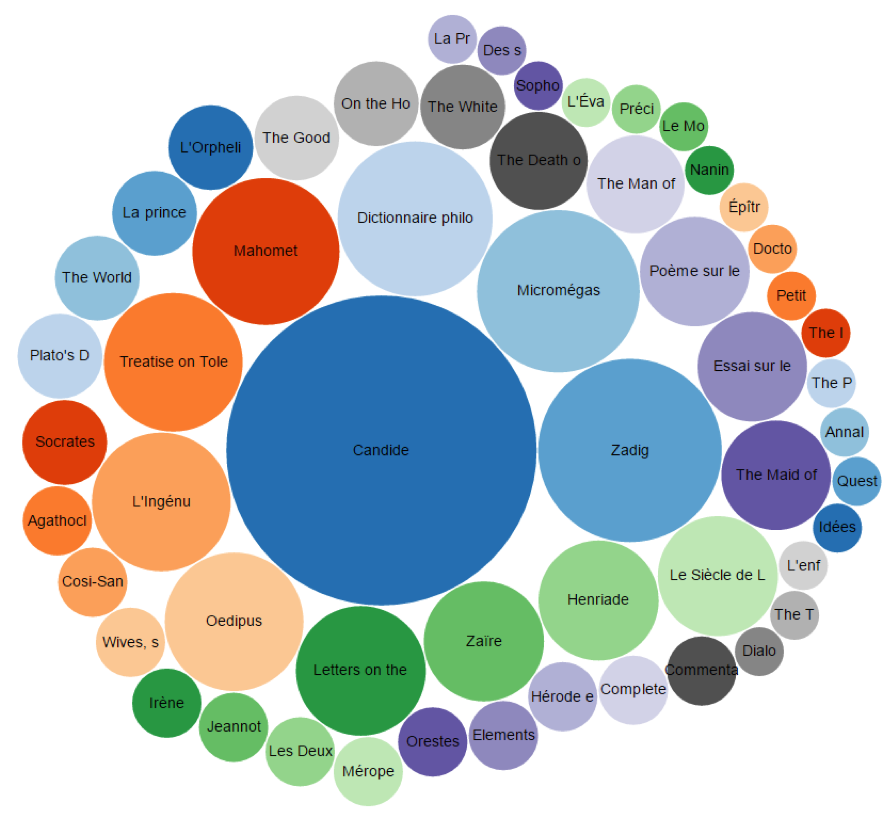 The timelines are built from three things:

We added articles, data and images to what was already present on these sites. Since Wikimedia sites are open and free, this content is available for reuse by other sites and applications. For instance, the images have been tagged by their year, language and subject so as to appear in searches and image galleries (for example for books in French or books from the eighteenth century).

A custom Wikidata query showed works by Voltaire with their publication dates, helping to identify works lacking a date. We added new entries for some works that were absent, including most of the historical works.

The . }%0ASERVICE wikibase:label {bd:serviceParam wikibase:language “fr,en,de”.}%0A?type rdfs:label ?typelabel FILTER(lang(?typelabel) %3D”en”).%0A}&url=link&title=workLabel&from=pubdate&fromPrecision=pubdatePrecision&imageUrl=image&colourCodeBy=typelabel&threshold=1&filterGroup=typelabel&view=timeline” target=”_blank”>timeline of Voltaire’s works uses a custom database query to bring all this content together. The timeline does not by any means include all of Voltaire’s works, but more will appear in future as their details are added to Wikidata. As well as each work’s title, publication date and image, the query returns the type of work; poems, plays, fiction and so on. This is used to colour-code the timeline. Clicking on the drop icon in the top left brings up a list of types. Readers can select the type they are interested in to filter the results shown in the timeline, for example to show only the histories. To make the histories especially visible, we added title page images from public domain sources or the Voltaire Foundation’s own collection.

As well as the timeline of works, we used Histropedia to create a companion timeline for ‘An explorer’s guide to the Siècle de Louis XIV ’. Instead of a database query, this one is driven by a fixed list of people and events, all of whom already had articles in English Wikipedia. The resulting timeline is the sort of thing that we like to imagine Voltaire might have produced, if he’d had access to Wikipedia while researching his monumental history of the reign of the Sun King. We’re sure he would have been unable to resist adding to Wikipedia a few articles of his own…

We created English articles on The Age of Louis XIV, Essai sur les mœurs et l’esprit des nations, Annals of the Empire and Précis du siècle de Louis XV. These are not intended to be comprehensive, but to give basic facts about each work, to indicate why each work is important and to cite printed editions and relevant online resources, such as the explorer’s guide.

One way we drew readers to these new articles was to make links from elsewhere in Wikipedia, naturally including the Voltaire article which gets 3670 hits per day. Another was to use the Did You Know (DYK) process: new articles, of sufficient length, can be submitted for review. If they pass a check of accuracy and quality, an interesting fact from the article, linked to the full article, appears on the front page of English Wikipedia for twelve hours, exposing it to potentially millions of people. The articles on Essai sur les mœurs and The Age of Louis XIV were both submitted to DYK, getting 1584 hits and 1070 hits respectively during their times on the front page. The attention inspired another Wikipedian to create a Turkish article on the Essai, bringing the total number of Wikipedia articles on the Essai to five.

The four new English articles get about fifty views per day, or 18,000 per year. They have been checked and approved by other Wikipedians, and the individual facts within them are cited, so can be expected to remain in Wikipedia from now on.

Someone who has just read an article is open to reading a related article. In usability research, the end of an article is termed a ‘seducible moment’ for this reason. Wikipedia uses navigational templates (blocks of related links) to take advantage of these moments and direct readers to articles on the same theme.

Comparing article hit rates before and after the change, we estimate that the French navigational template increased views of its articles by about 2,000 per month, or 24,000 per year.