Bonne rentrée! This September marks a milestone for the OCV team as we publish the final chapters of our critical edition of Voltaire’s Siècle de Louis XIV (OCV, vol.13D), in which Voltaire explores the cultural history of the reign, including chapters on religious conflict and sectarianism as well as on achievements in the scientific, artistic and literary spheres. This volume completes the critical edition of the narrative of this monumental work, representing over 1500 pages of Voltaire’s text and editorial notes. The general editor, Diego Venturino, has meticulously pieced together Voltaire’s sources and analysed the context in which he worked and the way he sifted evidence to provide a revealing and comprehensive account of Voltaire’s historical method. We’re very happy with how handsome they look on our shelf, as well as proud of the diligence and hard work that has gone into making them just as magnificent on the inside. 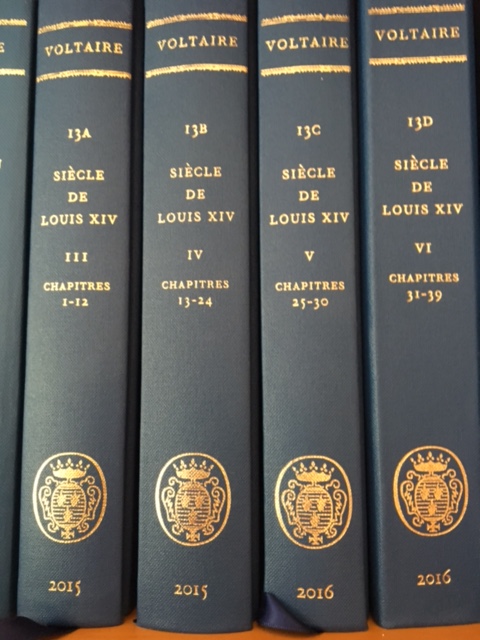 We were also really pleased this summer to launch an update to our explorer’s guide to Louis XIV. We wanted to provide a resource which would enable the scholarly research in the books to reach a wider audience, as well as giving some of the background to one of the most remarkable monarchs in European history. When the BBC series Versailles hit our screens earlier in the summer, we thought it would be interesting to explore some of the characters and events featured in the series from the viewpoint, not so much of ‘were they really like that?’ but ‘what did Voltaire have to say about them?’. It’s striking how many of the eye-catching incidents can be traced back to him, and we’ve enjoyed exploring how much further some of the hints provided by Voltaire and other historians have been stretched by the mischievous programme-makers. As joint ‘secretaries’ of the edition, both working part-time and fitting in family commitments around our work on Voltaire, Pippa Faucheux and I have been particularly pleased that we’ve been able to keep the continuity over the summer, working closely with our valued collaborators, including general editor Professor Venturino and our partners at the Palace of Versailles, as well as our indexer, typesetters and printers in the UK. We’re now excited about moving on to get to grips with the fascinating ‘Catalogue des écrivains’, the Who’s Who of Louis XIV’s world that launches the reader into the narrative of the Siècle, for publication in spring 2017 (OCV, vol.12). – Alison Oliver