Le Carla, a medieval fortified village near Foix in the Ariège, was the birthplace of Pierre Bayle, and the fitting location of a two-day meeting – open to all – on the subject of Huguenot travels and correspondence (November 9th-10th). 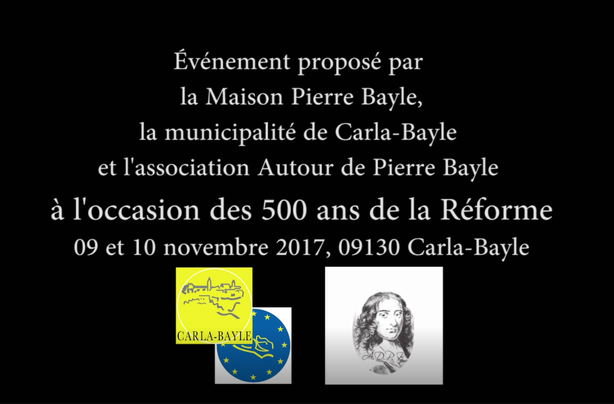 Bayle kept fond memories of his home town throughout his life and regretted not having taken more interest in the local agricultural and apicultural preoccupations. Out of nostalgia, he even devotes a few articles in his Dictionnaire historique et critique to local towns or local phenomena. Despite his long period of exile in Rotterdam (1681-1706), he never really settled down in the city: he never learnt to speak Dutch and never got used to the bitterly cold winters, nor to the custom of beer-drinking. After all, he was used to the warm climate of the French south and to drinking wine with his meals. The thick tobacco smoke that engulfed Dutch taverns also made everyday life difficult for him, bringing on migraines so debilitating that they forced him to abandon his journalistic activities in 1687. His reluctance to accept integration into Dutch society was also fuelled by his hope that political negotiations might make it possible for the exiled Huguenots to return to France, in all freedom of conscience. For an unparallelled insight into Bayle’s time in Rotterdam (and much more), delve into the Correspondance de Pierre Bayle (15 vols) – the first complete edition of his letters.

A great number of local people from many different professional backgrounds attended the meeting, located very appropriately at the Maison Pierre Bayle – appropriate as the Maison was established on the site of the original Bayle family home. Surrounded by Bayle’s own works and a large library of critical works dedicated to his life and writings (and even a life-size puppet representing the philosopher with quill in hand), the sessions were both intense and stimulating: a rare opportunity to take Bayle outside the circle of university specialists.

Following the initiative of the mayor, Jean-Luc Couret, back in the 1990s, the village of Le Carla (now officially renamed Le Carla-Bayle) has been beautifully restored and is now considered to be one of the most important cultural centres of the region. It hosts many lectures open to the general public and a myriad of activities surrounding these lectures. A number of painters, sculptors and potters have also established their studios in the village and a vibrant arts festival takes place each spring. The original Protestant church (or temple in French) is still in place and in use, just as it was when Bayle’s father and elder brother served as its ministers.

Here are are some of the highlights of the November meeting :