Publish, possibly perish, but live life to the full 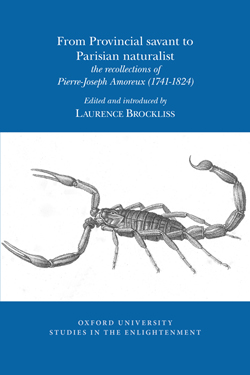 The Age of the Enlightenment was awash with print and the number of authors, male and female, with at least one publication to their name grew by leaps and bounds across the eighteenth century. Becoming a published author, however, was not always easy. The reading public wanted to be entertained as well as informed, and dry works of science and scholarship were not to their taste. Mathematicians, natural philosophers, and even antiquarians who wanted to place an erudite tome in the public domain had to either find a patron to finance the cost of publication or put their hands in their own pockets. Members of the eighteenth-century Republic of Letters were proud of their independence but seldom rich. As a result, many published little of substance. Those who did often exhausted their inheritance and faced bankruptcy. The Montpellier naturalist and agronomist, Pierre-Joseph Amoreux (1741-1824), a savant of limited means with an itch to write, struggled throughout his life to get his words of wisdom into print. His lengthy autobiography, left on his death in manuscript form, is an extraordinary window into the trials and tribulations of the enlightened scientist as author. Edited and introduced by myself for the first time under the title From Provincial savant to Parisian naturalist: the recollections of Pierre-Joseph Amoreux (1741-1824), it is essential reading for anyone working on the history of the book in the long eighteenth century.

Amoreux had his first introduction to vanity publishing in 1784 when he sought to find a printer for his Traité de l’olivier. Rather than negotiate with a local Montpellier publisher or send his manuscript to Paris, he decided to try his luck in Avignon, which had a thriving commercial press. Avignon was part of the Papal States and its printer-booksellers, largely free from the censorship restrictions that their French counterparts endured, purportedly offered good terms.

The experience was not a happy one. Amoreux’s initial investigations led him to believe that an Avignon house would charge him 30 livres per folio sheet of sixteen pages: 24 livres to cover the cost, plus 6 livres profit. This, however, turned out not to be the case. A medical friend in the city, Jean-Claude Pancin, who acted as go-between, approached two printers of repute. Both refused to take the book on such a small return. Balthazard-Jean Niel (1724-c.1789) demanded 40 livres a folio and a further 30 for 300 flyers, and could not be shifted. Pancin dismissed him as ‘une espèce de juif’, a stinging insult in a town with a sizeable ghettoised Jewish minority. The terms of Jean-Louis Chambeau (c.1716-1780) were better, but he still wanted a premium of 28 sous per folio on the grounds that typesetting the manuscript required three different fonts. Moreover, it proved impossible to close the deal because Chambeau’s compositor objected to the state of the manuscript: Amoreux had sent his friend a manuscript peppered with ‘petits billets sous forme d’additions attachées au texte.’

The Montpellier naturalist had no choice but to see if he could get an acceptable quote from a publisher in his home town. This he must have done, for the 365-page book was eventually published by a printer called Guiot and distributed through the bookshop of the widow Gontier. Assuming Guiot charged 30 livres per sheet, the publication would have cost Amoreux nearly 700 livres. This would have made a considerable hole in his purse. At this date Amoreux’s only income came from his post as a medical librarian, worth 500 livres per annum. Had he not been a bachelor still living at home with his parents, he would never have been able to publish his first substantial book. And had he not managed to do so, he might well have thrown in the towel and published next to nothing, like so many of his contemporaries in the Republic of Letters.

Amoreux’s autobiography, however, is more than a study of the angst of the scientific author. Starting in 1800, Amoreux made continual visits to the capital to taste its intellectual delights. His Souvenirs provide a detailed account of his stays in Paris. With Amoreux, the reader will walk the city from end to end, cross its bridges old and new, visit its museums and bookshops, revel in the sights and sounds of the Champs Elysées on Bastille Day, and catch a glimpse of Napoleon through the crowd. On the way to listen to the lectures of Cuvier or some other intellectual giant, he or she will even drop into the Paris morgue. No other account of early nineteenth-century Paris catches so fully the multi-faceted nature of the vibrant post-Revolutionary city, whose cast of characters ranges from bankers to barrow-boys. If Amoreux had had the literary talent, he could have left a work which would have stood comparison with Joyce’s Ulysses. Nobody interested in Napoleon’s Paris as the cultural centre of Europe should miss the opportunity to accompany the Montpellier naturalist on his travels.