Le Temple de la gloire was commissioned by the duc de Richelieu to celebrate Louis XV’s return to Versailles after a famous (and rare) victory at Fontenoy, in the War of the Austrian Succession. Voltaire provided the libretto, and the piece, described variously as an opéra-ballet or ballet héroïque, was set to music by Jean-Philippe Rameau. There were two performances at court in late November and early December 1745, followed by further performances in Paris, and a short-lived revival of a revised version in 1746: since then, the piece has all but vanished. 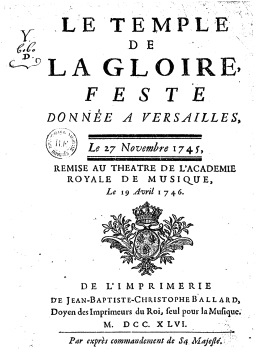 Russell Goulbourne’s critical edition of Le Temple de la gloire in the Œuvres complètes de Voltaire (vol. 28A, 2006) gets to grips for the first time with the complicated history of Voltaire’s libretto. But it is hard to fully appreciate any libretto without the music which brings it to life. Voltaire’s libretto was frequently printed in his lifetime, but Rameau’s music remained unpublished until 1909, when Saint-Saëns brought out the 1746 version of the score; the music of the 1745 version, long thought lost, has only recently turned up in the university library at Berkeley. A French musicologist, Julien Dubruque, has just produced the first critical edition of the score (Opera omnia Rameau, vol. IV.12), its appearance in 2014 timed to coincide with the celebrations of the 250th anniversary of the composer’s death. Much of this music has never been heard since the eighteenth century, and on 14 October 2014 a concert performance of Le Temple de la gloire was given in the beautiful eighteenth-century Opéra Royal at Versailles, with Guy Van Waas conducting his orchestra, Les Agrémens, and the Chœur de chambre de Namur. To those of us who had only heard the old LP recording made by Jean-Claude Malgoire (CBS, 1982), this concert was an amazing revelation. 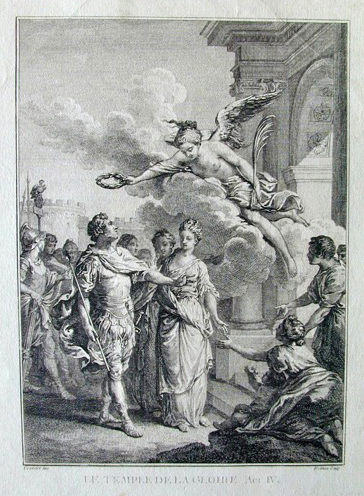 Of course Le Temple de la gloire was only ever an occasional piece, but perhaps on that account we have underestimated it. The work was patently an attempt to relive the glory days of the celebrations at the court of Louis XIV. But if Louis XV was clearly uncomfortable in the shoes of the Sun King, Rameau and Voltaire, on the evidence of this concert, could certainly fill the shoes of Lully and Quinault. The re-emergence of Rameau’s glorious music – and a recording of the concert is to be released – should encourage us to return to Voltaire’s libretto and reassess his achievement as a writer for the Court. The concert can be heard on the website of France Musique until 13 November 2014. For more on eighteenth-century libretti, see Le Livret d’opéra en France au XVIIIe siècle, by Béatrice Didier. – Nicholas Cronk