A tale of losing, finding and coming home 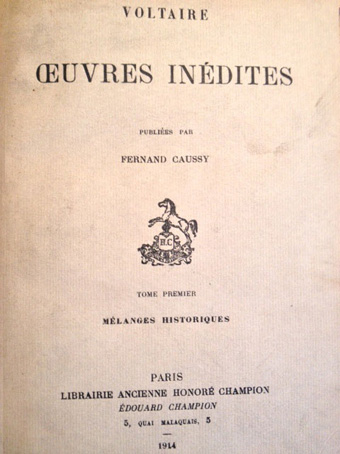 In April of last year we were mourning the loss of our friend and colleague José-Michel Moureaux, whom we remember not only for the impeccable editions that he prepared for the Œuvres complètes de Voltaire (for instance La Défense de mon oncle, the Discours de l’Empereur Julien), but also for his good advice, his unfailing interest in the life of the Voltaire Foundation and his kindness. We still feel his loss most keenly. In April of this year, working on the chapters of the Essai sur les mœurs concerned with the discovery of the New World, we were in need of Fernand Caussy’s Œuvres inédites de Voltaire, a rare book of which the first volume only was printed just before the outbreak of the First World War (a small 1971 reprint is no longer available). This volume contains the fruits of Caussy’s work in St Petersburg more than a hundred years ago, among them transcriptions made by him of unpublished manuscript fragments in Voltaire’s hand relating to the chapters in the Essai sur les mœurs on the New World and only partially retranscribed by R. Pomeau during his own visit to St Petersburg. Up to now we have made use of the copy in the Bodleian Library, but for detailed work on these particular fragments we needed a copy here at 99 Banbury Road, a copy that we could use intensively – even adding our own marginalia!  We made one last on-line search, and located a copy of the original edition for sale by a small bookseller in the south of France. 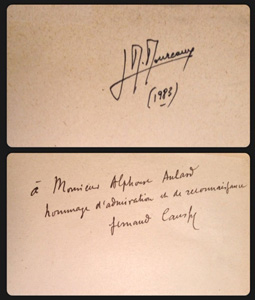 Once the book arrived our need to get on with the work for the Essai was so pressing (this volume, OCV, t.26A, was published last month) that it was several weeks before the volume happened to fall open at the flyleaf, where we found the signature ‘J.-M. Moureaux, 1983’… José-Michel’s copy was signed as a presentation copy from Fernand Caussy to one of his own colleagues in 1914.  It has at some stage been bound in an institutional binding. We don’t know how it came into José-Michel’s own library, but we are delighted that it has made its way to 99 Banbury Road, and we like to think that José-Michel would have been delighted too. –JG