The Taste of deception: plague, food, and medicine in seventeenth-century England

Today we are making a foray into the seventeenth century with Claire Turner. Claire is a first-year PhD student at the University of Leeds. Her research, which builds on her recent MA dissertation, focuses on how people experienced and perceived the plague through their senses in seventeenth-century England.

How well do you know your food, drink, and medicines? Do you trust their ingredients, appearance, and their taste? Recent research has demonstrated the importance of a balanced diet for convalescents in the early modern period. These concerns were equally prominent during London’s seventeenth-century plague outbreaks. People have always used their senses to decipher whether foods are pleasant or unpleasant, safe or unsafe. However, the senses could be easily deceived, no more so than in seventeenth-century discourses of food, drink, and medicine.

In 1665, the plague visited London for the final time. Known as the Great Plague, this outbreak was arguably the most severe to visit the city in the seventeenth century. Concerns over the quality and wholesomeness of foodstuffs were paramount. In particular, Margaret Dorey has noted how contemporaries of plague outbreaks were suspicious of food traders such as butchers. A tract published in response to the outbreak included a warning to its readers. Roger Dixon highlighted the dangers of consuming meat which had been modified by the butchers who were selling it. The meat was blown into by the butchers with their ‘…filthy Pockey, Stinking, Putrified Breath, whereby they putrifie the flesh’. The practice of blowing meat was used by butchers in the early modern period to make their meat look plump, healthy, and fresh. In this way, butchers were deceiving the sense of sight. By making their foul meat look healthy, they actually further contaminated the meat by depositing their foul-smelling and potentially contagious breath into it.

Another significant outbreak occurred in London in 1625. At around the same time, Lady Frances Catchmay completed her compilation of medical recipes in A booke of medicens. One of these recipes concerned the plague. It advised the use of sugar to counteract the unpleasant taste of the remedy. Here, the use of sweet-tasting substances disguised the bitter and unsavoury taste of the medicine. As well as deceiving the sense of taste, the author of the recipe invoked the sense of sight by encouraging the addition of ‘three spoonefulls of white vinegar’. Derived from ancient European thought, the colour white was associated with purity. Research by Sidney W. Mintz has outlined that substances such as sugar and vinegar were deemed particularly effective when they were especially white. By influencing the colour and taste of the remedy, the author made the medicine appear even more effective and wholesome.

Issues concerning sensory deception in diet and physick were evident across numerous plague epidemics. In both 1625 and 1665, authors of plague tracts focused on the hazards of consuming pleasant-tasting food and the benefits of eating seemingly unsavoury food. In 1625, London physician Stephen Bradwell advised his readers not to consume sweet-tasting foods because it ‘betrayes their vnfitnesse in times of Contagion’. Similarly, in London, in 1665, an anonymous tract encouraged the consumption of sharp-tasting sauces and juices alongside meats which did not putrefy and were easily digestible. 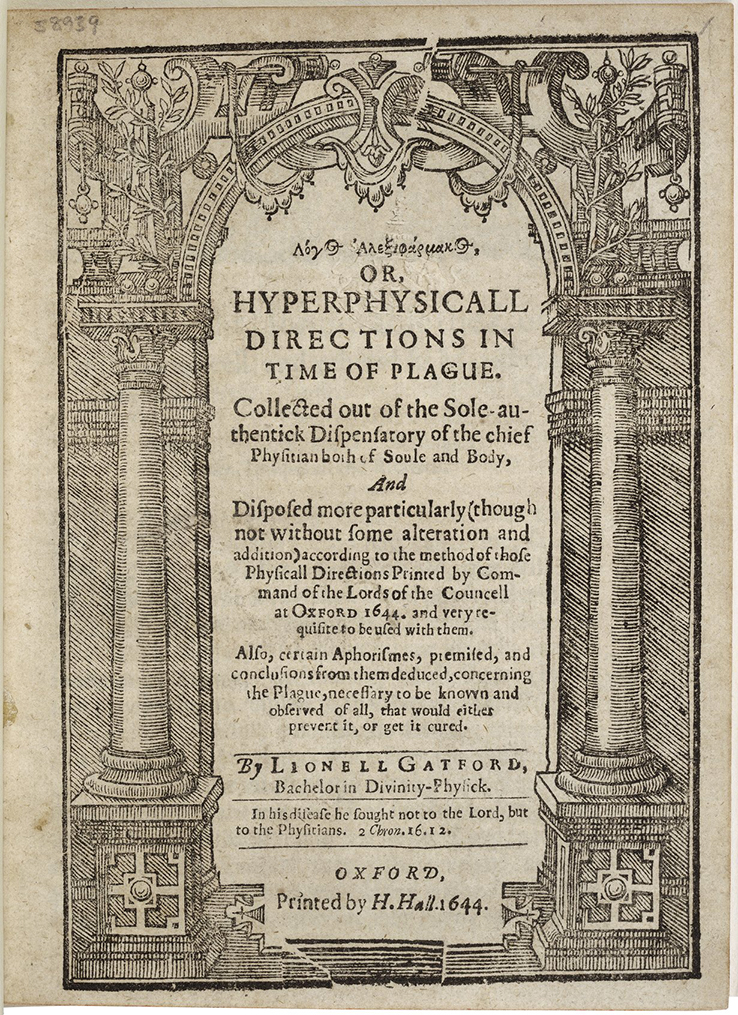 This awareness of the benefits of sharp-tasting foods was also present in tracts relating to plague outbreaks outside of London. In Oxford in 1644, Lionel Gatford informed his readers that often the most unsavoury and sharp tastes were ‘undoubtedly the most wholsome’. Therefore, these writers warned their readers not to let their sense of taste deceive them. To a certain extent, theories of food consumption and plague in the seventeenth century reinforced the notion that sensory ‘opposites attract’.

Ideas about illness and taste are once again at the forefront of our minds in the current COVID-19 pandemic. Health experts have reported that a proportion of COVID-19 sufferers experience an absence of the senses of taste and smell. It is clear, then, that the sense of taste will always remain a key indicator in experiences of illness and recovery. Alongside the other senses, taste in the seventeenth century was deceptive and hazardous. Today, its absence is just as menacing.