THE FRENCHMAN: Is it true that your Sultan can marry hundreds of wives who are kept in a forbidden place known as a ‘harem’, to which, apart from the Sultan himself, only eunuchs have access, men whom our Voltaire describes as chaponnés? Is it true that their job is to keep the harem tidy, to sort out squabbles between inmates, and to make sure that whichever wife the Sultan has chosen for the night is epilated, bathed and perfumed ready for her master’s bed? Is it also true that only one wife is permitted to bear the children that will constitute the royal bloodline? And that any offspring born to the others will be considered illegitimate? And that of those bastard children, the pretty girls will be offered to another ruler for his harem (thereby making sure that the Sultan does not, inadvertently, bed one of his own daughters), while the plain or ugly girls and all the boys are sold at market? 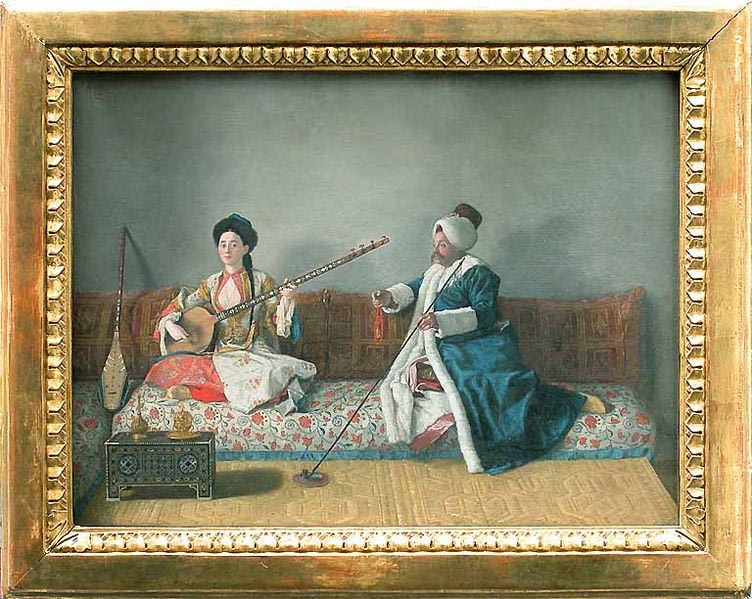 “Monsieur Levett and Mademoiselle Glavani in Turkish costume”, oil on canvas by the Swiss-French artist Jean-Etienne Liotard. Painted at Constantinople circa 1740, the work shows English merchant Francis Levett, of the Levant Company, with his friend Miss Glavani, in the dress favoured by Liotard in his works. Courtesy of the Louvre Museum, Paris.

THE TURK: All too true. Our pirate ships criss-cross the seas on the lookout for vessels likely to be carrying pretty girls, and the pirates seize them. Once on board they separate the men and the boys from the women, and the pretty girls from the plain or ugly ones. They then sell the males and the less attractive females at market wherever they happen next to make landfall. The pretty girls are then offered to the Sultan for his harem. As for the elaborate rituals involved in preparing the wife whom the Sultan appoints to share his bed on a particular night, I can do no better than refer you to Wikipedia, a work of reference which can be consulted much faster than it takes to lift down from the shelf the weighty tomes of the work edited by your Monsieur Diderot. As for the locus standi of a particular member of a harem, a case involving a lady from what you call the Holy Land is about to be heard in London. The High Court will decide if a vow the Sultan made her – to wit, that she would be well provided for once he no longer required her services – is enforceable in law. If it turns out to be so, his Sultanic Highness will have to hand over twelve million gold dinars to the lady in question. It is a landmark case; here is the reference for your convenience. – John Fletcher, translator of Voltaire’s A Pocket Philosophical Dictionary