Voltaire’s ‘Hymn to Liberty’: in search of a wider audience 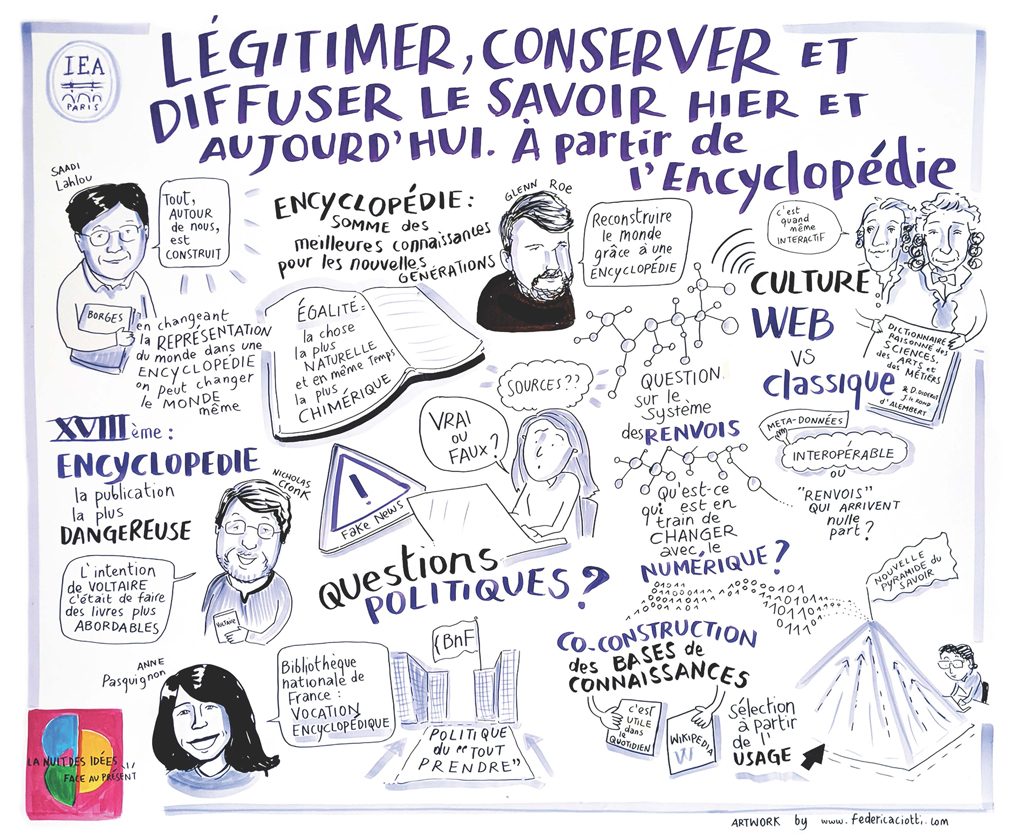 On January 31st, France celebrated the ‘Nuit des idées’. Now in its fourth year, this is a festival of public events designed to engage broad debate around all manner of ideas and issues, and it is celebrated all over France as well as in the various French cultural institutes in more than 70 countries around the world.

The theme this year was ‘Face au présent’, and the Institut d’Études Avancées (IEA) in Paris organised an evening of events to discuss how knowledge is legitimised and spread, from the eighteenth century to the twenty-first, from the Encyclopédie to Wikipedia.

Two roundtable discussions on the topic ‘Rassembler, légitimer et diffuser le savoir, hier, aujourd’hui et demain’ were chaired by Saadi Lahlou, director of the IEA. The first panel, made up of Anne Pasquignon (BnF), Glenn Roe (Sorbonne, and Digital Research Fellow at the Voltaire Foundation) and myself, talked in particular about the issues of classification that were problematic for the Encyclopédie and remain so today for the BnF. The second panel, devoted to the theme ‘Formes émergentes de construction et de partage des connaissances’, brought together Pierre-Yves Beaudouin (president of Wikimédia France), Dominique Cardon (director of the Médialab at Sciences Po), Primavera de Filippi (CNRS, and attached to the Berkman Center for Internet and Society at Harvard), and Charlie Danger (historian and archaeologist), who describes herself as ‘la première vidéaste vulgarisatrice féminine sur Youtube’). This being a ‘night’ of ideas, the panels provoked lively discussions that lasted until nearly midnight. 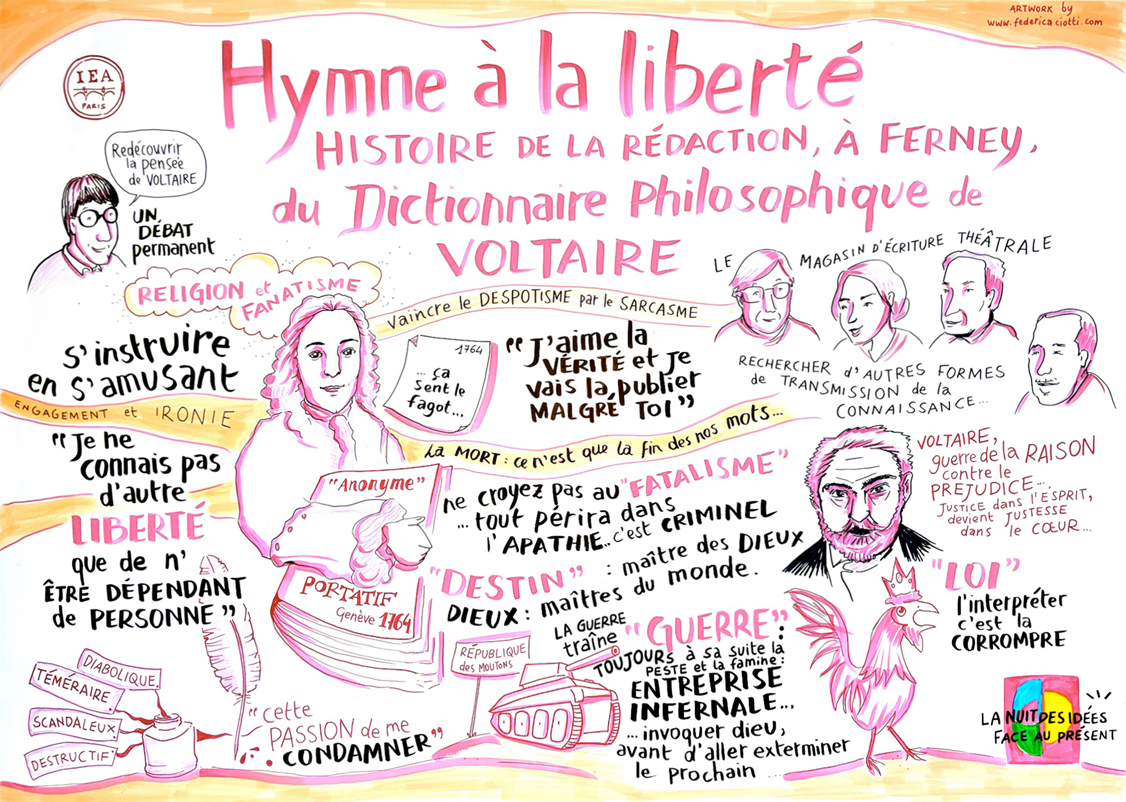 The evening that finished with Wikipedia had begun with Voltaire. The panels were preceded at 6:30pm by a theatrical performance, a lecture-spectacle, entitled Hymne à la liberté. This remarkable text is the creation of the actor and director Jean-Claude Idée who with the philosopher Michel Onfray created in 2012 the Universités Populaires du Théâtre. Their ambition, inspired by the work of Jean Vilar, was to produce accessible theatrical perfomances in unconventional spaces that would be free and open to all; the texts performed were philosophical and thought-provoking, accessible but certainly not dumbed down. Over the years the Universités Populaires du Théâtre have produced leçons-spectacle based on authors ranging from Ovid, Erasmus, Rabelais and Montaigne to Camus and Sartre. Enlightenment texts have figured too, notably Diderot and Voltaire. The full title of the work performed is Hymne à la liberté: Histoire de la rédaction, à Ferney, du ‘Dictionnaire Philosophique’ de Voltaire – the published text is available – and it is made up of a selection of articles taken from the Dictionnaire philosophique, with a Prologue and Epilogue explaining to the audience the circumstances in which the work came to be written. The three actors, Annette Brodkom, Jacques Neefs and Jean-Claude Idée himself, read several articles from the Dictonnaire philosophique, beginning with ‘Egalité’, and ‘Fanatisme’: the rhythms of Voltaire’s prose when read aloud are remarkable, and the actors brought out to the full the inherent theatricality of Voltaire’s voices at play in this work. There was audience participation too, when we were asked to vote between ‘Athéisme’ and ‘Credo’ (‘Athéisme’ won), and between ‘Destin’ and ‘Dogme’ (we went for ‘Destin’). A vote between ‘Guerre’ and ‘Loi’ was happily too close to call, so the actors gave us both. It transpired that Victor Hugo was sitting in the body of the hall and he intervened at one point to read us the celebrated ‘Discours’ delivered in 1878, on the centenary of Voltaire’s death. The Epilogue describes how Voltaire uses the theatre to educate, and the performance ended with these words:

Jean-Claude Idée’s aim was to offer the audience a chance to (re)discover a major work by Voltaire while bringing out its relevance to the present, and the performance was followed by an exchange between Jean-Claude Idée and myself, initiating a debate with the audience reflecting on the role of live spectacle as a means of transmission of ideas, and as an interactive pedagogic tool, for teaching literary and philosophical texts in schools: one teacher, for example, intervened to say that recordings of the Dictionnaire philosophique would be a powerful way to engage school students with Voltaire.

The performance and ensuing debate were certainly successful in taking an eighteenth-century polemical text and making it speak to and engage a modern audience. It also made me reflect on Voltaire’s own intentions in writing his Dictionnaire philosophique portatif. Publication of the Encyclopédie came to a halt in 1757, after the publication of volume 7, and when the Portatif appeared in 1764, no one knew when or if the remaining volumes of the Encyclopédie would ever see the light of day (in the event, they appeared all together the following year, 1765). So Voltaire’s Portatif – a title he uses in the correspondence (see for instance his letter of 1 October 1764 to D’Alembert, D12113) – is not just a response to the publicity generated by the Calas affair; it is also a riposte to the challenge of publishing a large encyclopedia in multiple folio volumes. The government could successfully censor such a large and cumbersome enterprise. But Voltaire’s Portatif – a Livre de poche ahead of its time – was easier to publish, easier to smuggle, and harder to censor effectively. Smaller books are faster to produce and easier to hide; and being cheaper, they can reach a larger audience.

As Voltaire writes to D’Alembert, on the subject of the censorship of the Encyclopédie:

Voltaire’s response to the encyclopedic project does not of course end with the Portatif, for after 1770 it continues with the Questions sur l’Encyclopédie, published in 9 volumes over two years. This work has long been neglected, but the new critical edition, the first printing of the integral text since the eighteenth century, has now appeared in the Complete works of Voltaire (8 vols, 2007-2018), as described in Gillian Pink’s recent blog. As a follow-up to the Voltaire Foundation edition, a one-volume edition of the Questions sur l’Encyclopédie is due to appear in the Bouquins collection in April 2019.

Jean-Claude Idée is planning a collaboration with the Voltaire Foundation to produce a spectacle based on articles from the Questions, and it will be enormously instructive to hear how the actors bring to life the Voltairean voices in these texts. The question of why Voltaire ceased revising the Dictionnaire philosophique after 1769, and turned instead to creating a new and longer alphabetical work, is not easily answered. One response might be to say that by 1770, when Voltaire enjoyed towering celebrity status, he was hardly concerned to say new things, but he was most definitely concerned to convey his message to a new and wider audience. And certainly one way to test this hypothesis will be to bring the articles to life in front of audiences and measure their reaction.

Cultural institutions in the twenty-first century have an obligation to reach out and engage wider publics. But perhaps this is nothing new. The spirit of the Enlightenment was emphatically to take new thinking to wider audiences – in Diderot’s words, à propos of the Encyclopédie, ‘changer la façon commune de penser’ – and Voltaire is deeply engaged in this movement. Evidence for his desire to reach new publics can be found in his style and expression, as well as in his experiments with different literary forms. In the best sense of the term, Voltaire was a great journalist. In the precarious business of speaking truth to power, he was firmly in the tradition of Auberon Waugh, who gave this advice to the author and journalist Henry Porter:

‘You should tell the truth as often as you can, but in such a way as people don’t believe you or think that you’re being funny.’