Voltaire’s London: Reconstructing a vision of London past

Academics are constantly reminded of the debts owed to previous generations of scholars. We footnote them, refer to their work, profit from their travails, build on their groundwork and sometimes correct their errors. As the Voltaire Foundation embarks upon the critical edition of the Lettres sur les Anglais for the complete works collection, we are again delving back into the network of places that the Frenchman visited and people he encountered during his sojourn in England. A large number of scholars have already surveyed the terrain before. None, however, was quite so focussed as Norma Perry (1923-2007). Perry devoted herself to following Voltaire’s footsteps around London. She wrote a long article, ‘Voltaire in London’, for The Times which was published on 22 April 1978, demonstrating her commitment to academic impact! It was also due to Perry that the plaque in Maiden Lane was established in 1979, and improved in 1994. Perry’s principal research outputs from her Voltaire research were Sir Everard Fawkener, Friend of Voltaire, published in the Studies in Voltaire and the eighteenth century series in 1975, and various articles and book chapters. Particularly noteworthy are the article ‘The Rainbow, the White Peruke and the Bedford Head: Voltaire’s London haunts’ (in SVEC 179, Oxford, 1979) and the chapter titled ‘City Life in the 1720s: the Example of Four of Voltaire’s Acquaintances’ in the 1994 book The Secular City: Studies in the Enlightenment presented to Haydn Mason. Perry’s papers were left to the Taylorian Library in Oxford. Leafing through them, we learn of her singular quest to document any possible place Voltaire may (or may not!) have passed through. Her scholarship on Sir Everard Fawkener drew her to develop an interest for places Voltaire could have visited, and what those places may have looked like in the 1720s. 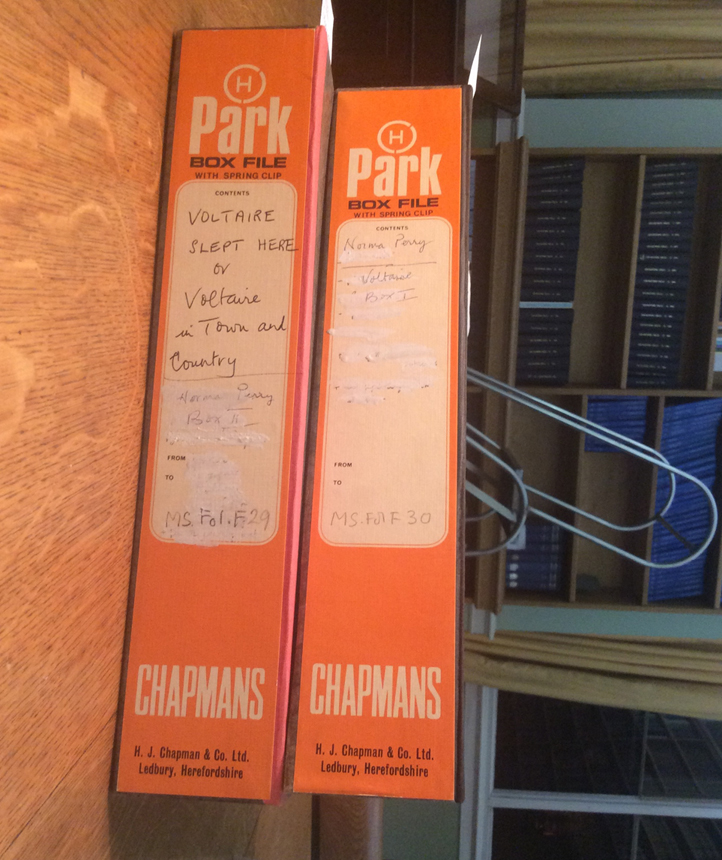 The various papers are also a window into research methods which remind us how far technology has come in thirty years. From the vantage point of 2016, the index cards, photographs (complete with negatives), stamped reproductions of engravings and copies of correspondence with numerous London councils seem almost as foreign as Voltaire’s own experience of London would have been. Perry’s intrepid investigations led her round London with a camera (loaded with film!) to document any possible trace of what Voltaire may have seen. This was a devoted quest, a fixation, an obsession almost. The papers function as both a testimony to Perry’s persistence and perhaps also as a warning to future scholars… 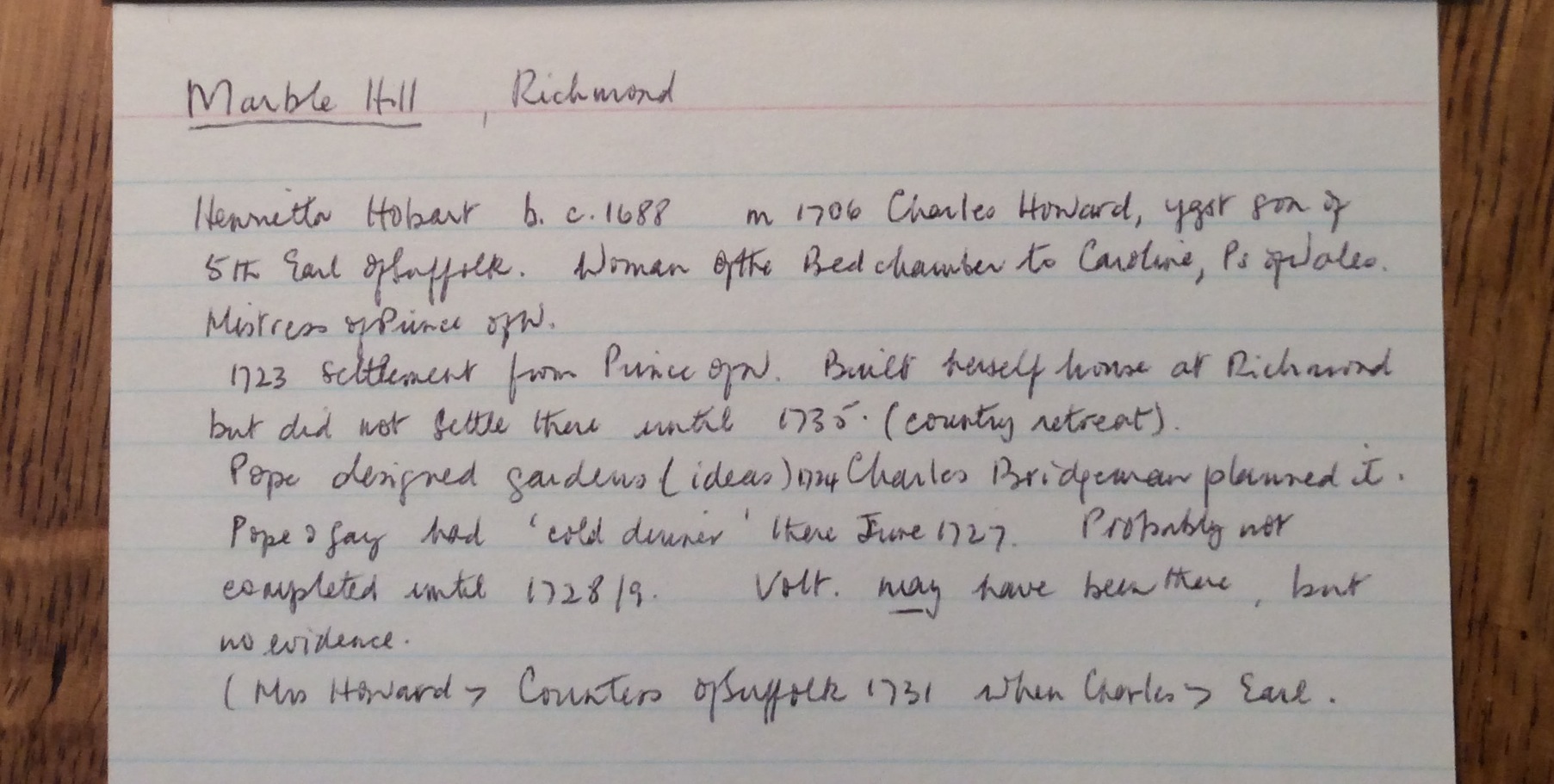 The warning is in many ways the obsession with possibilities, and the hypothetical. Perry used the evidence that is available to scholars: correspondence effectively reveals a network of people Voltaire knew and had dealings with. It also reveals the places Voltaire definitely visited. Perry’s index cards contain a whole host of ‘possible’ places Voltaire could have gone, which she subsequently investigated meticulously, honestly noting ‘no evidence’ for these. Despite this, she nevertheless ventured out to Cromwell House and photographed the fireplace, complete with its initials of the residents whom Voltaire might possibly have visited there, the Da Costa family. The images Perry sought out are now often retrievable with the click of a mouse. Many of these images are fascinating and extremely useful in allowing us to picture the London which Voltaire was so enamoured by. The engravings of Marlborough House by Samuel Wale, for example, or images of Alexander Pope’s Villa, or Sutton Nicholls’ engraving of Covent Garden c.1720: 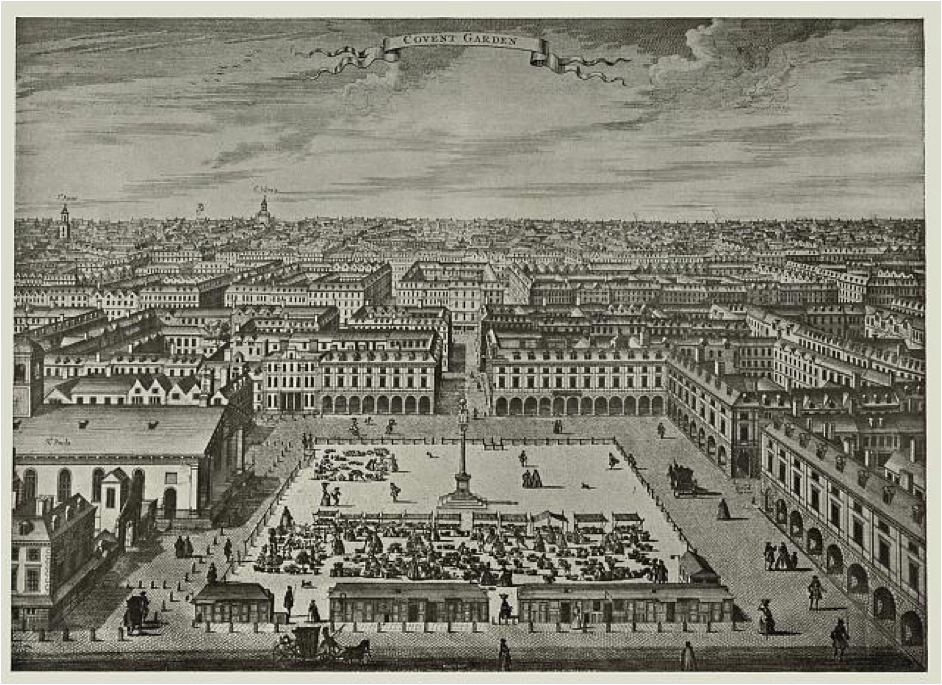 From Bowles, London Described or the most noted Regular Buildings, 1731.

The British Library’s Crace collection of historical maps of London has great digital applications. Perry would obviously have been thrilled by the possibility of overlaying historical maps with modern day ones. It goes without saying that despite these amazing advances, we are still significantly indebted to scholars like Perry who have done so much spadework on which we hope to build. – Nick Treuherz