When volcanoes erupted with meaning

When the Icelandic volcano Eyjafjallajökull erupted in April 2010 it threw up a huge, glass-rich ash plume nine kilometres into the sky, penetrating the jet stream which then swept the volcanic debris south-eastwards over most of Europe. European air space was closed down, stranding approximately ten million passengers over six days at a cost of £130 million per day to the aviation industry. It disrupted the funeral of the Polish president and general election campaigning in Scotland, and brought blissful quiet to residents around Heathrow and other major European hubs. Ironically, the noxious gas-spewing volcano actually reduced air pollution by grounding planes for nearly a week. Among both witnesses to the eruption and those marooned by its billowing ash-clouds, it also produced a lot of stories (as well as a plotline for a 2013 French comedy).

Yet these twenty-first-century anecdotes pale in comparison to the production of eighteenth-century ‘eruption narratives’ related by voluble, scribbling travellers of both sexes on the Grand Tour, socializing in Naples and picnicking on the burning flanks of Vesuvius or, more rarely, Etna. These breathless travelogues outnumber the more measured texts written by scientists on the same slopes, although both frequently draw on the reports diligently sent to the Royal Society by the most famous volcanologist of the age, Sir William Hamilton, British ambassador to the Kingdom of the Two Sicilies. In fact, scrambling up volcanoes became a form of secular ‘pilgrimage’ for natural historians such as Lazzaro Spallanzani who scoured the volcanoes of southern Italy from 1788 to 1790. Eruptions, then, produced not just tephra but texts. But they also drew artists to their brilliant blaze, establishing a lucrative industry in Naples for painters like Pierre Jacques Volaire, who would trim Vesuvius’s natural sublimity to populate its foreground with his patrons in tiny silhouette against the yellow fountains and scarlet streams of lava.

The erupting volcano became such a ubiquitous image in eighteenth-century Europe that, even for those who hadn’t seen one in person, it gave material form to their various philosophies of ‘enlightenment’. For physico-theologists, it provided a fizzling foretaste of the fiery Second Coming; for providentialists, it stood as a safety-valve defusing the globe’s dangerous internal fires – the work of a beneficent God; and for deists and materialists, its immemorially ancient layers of lava challenged Biblical chronologies of the Earth. Yet for all its ‘enlightenment(s)’, as Gaston Bachelard has suggested, the volcano atavistically divided its devotees into two camps: the Promethean and the Empedoclean – those who were afraid of it but looked to master its fire, and those who adored it, seeking a form of mystical union in its flames. On a political level, we can see this mythical conflict between Prometheus and Empedocles play out in the French Revolution, between those keen to curb the explosive forces of the ‘volcano of Revolution’, as Edmund Burke put it, and those who embraced its red-hot heat, stoking it to ever more violent conflagration. So when Vesuvius erupted terrifyingly in June 1794 at the height of the Terror, it seemed to many contemporaries that the physical and the political volcanoes were in league. Yet Vesuvius’s tremendous blast of that year was not the greatest of the century: for that we have to return to Iceland eleven years earlier for the cataclysmic eruption of Laki. We now have a clear scientific vision of Icelandic volcanism, the product of the island straddling the great Mid-Atlantic Ridge where two tectonic plates diverge. But in 1783, the eight-month outpouring of lava, ash and gas from the 27-kilometre-long Laki fissure dismayed contemporaries as it too (like Eyjafjallajökull’s ash plume in 2010) injected megatons of sulphuric acid and carbon dioxide into the lower stratosphere, cloaking western Europe in a deadly pall. A stifling summer was followed by a Siberian winter, killing hundreds of thousands of people and their livestock. Laki too produced stories – both intimate personal testimony from Icelandic survivors such as the so-called Fire Priest Jón Steingrímsson, and speculative climate theories involving comets, electricity, subterranean gases and the Calabrian earthquake of February that year. 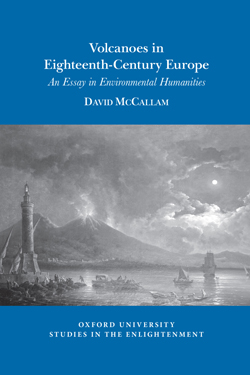 My study ranges over all of these fields of volcanic meaning-making in order to show how the volcano articulated the fantasies and fears of eighteenth-century Europe. But in weaving these diverse narratives together, it also looks to contextualize and counter the dominance of a largely scientific conception of volcanism. At precisely the point where some situate the birth of the Anthropocene and others the emergence of the hierarchical dualisms of culture/nature and sciences/humanities, Volcanoes in Eighteenth-Century Europe seeks to revise these notions in light of the volcano as it is also constructed in local lore, travellers’ tales and as iconic object, figure of religious or humanistic transcendence or political master-metaphor.

The above post is reblogged from Liverpool University Press. David McCallam is the author of Volcanoes in Eighteenth-Century Europe: An Essay in Environmental Humanities which is the first book to examine European volcanoes in the period in the full range of their physical and figurative manifestations and is the July volume of the Oxford University Studes in the Enlightenment series.