A Year in Oxford University Studies in the Enlightenment

As LUP continues to celebrate its 120-year anniversary, this month we are focusing on the eighteenth century and the Oxford University Studies in the Enlightenment series, published in partnership with one of our Partner Presses, the Voltaire Foundation.

On 1st August 2018, LUP officially joined together with the Voltaire Foundation, University of Oxford to publish the Oxford University Studies in the Enlightenment series. The series is international in focus and covers wide-ranging aspects of the eighteenth century and the Enlightenment, from gender studies to political theory, and from economics to visual arts and music, and is published in English or French. Now, nearing one year into the partnership, we’re looking back over the past 12 months in the series and the breadth of scholarship that it has published. 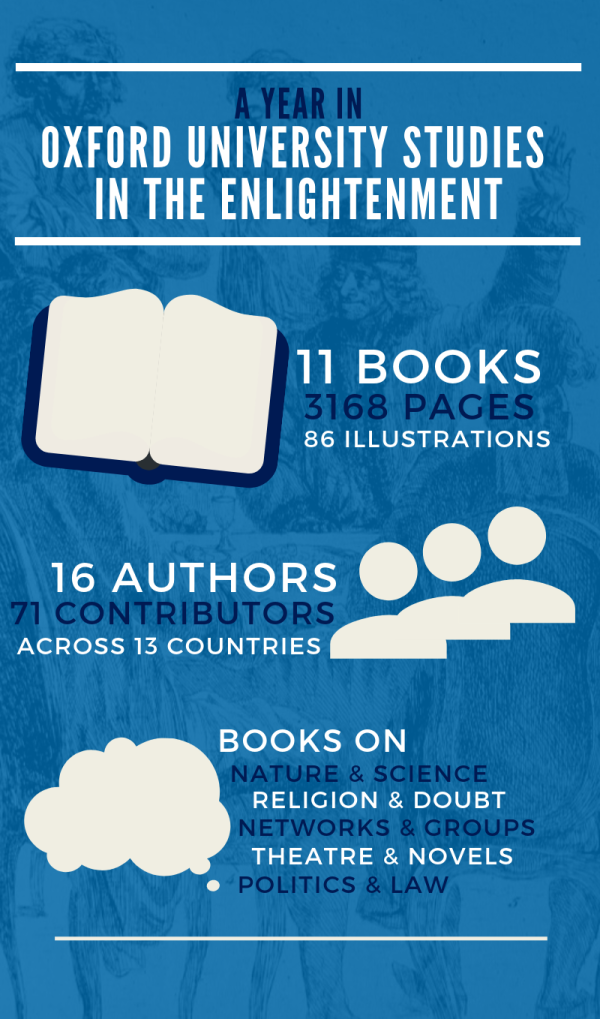 From the first volume under the new partnership, Denys Van Renen’s Nature and the new science in England, 1665 – 1726 to the most recent volume, Volcanoes in Eighteenth-Century Europe by David McCallam, the Oxford University Studies in the Enlightenment volumes published in the last year have covered topics as wide-ranging as correspondence networks and social network analysis, Beccaria’s criminal law and d’Argenson’s politics, and philosophical skepticism and narratives of religious faith. Our latest volume sees David McCallam consider the explosive history of volcanoes, drawing on a rich variety of multi-lingual primary sources and the latest critical thinking, to illustrate how the volcano is not only transnational but also transdisciplinary, a fitting subject for a series which aims to be interdisciplinary and global in its reach.

The near future will also see us welcome into the series books on Catherine the Great’s letter-writing as image-making, the Enlightenment concept of the ‘amateur’, and the omnipresence of Rome as a paradigm in John V’s Portugal, amongst many others. After such a successful and invigorating year of publishing, we look forward to many more months and volumes to come, expanding the series into even more thematic and geographical areas.

As part of the collaboration, LUP have developed a new digital collection Oxford University Studies in the Enlightenment ONLINE, a unique resource for research in the Enlightenment that sees the series’ backlist made available digitally for the first time. Now, one year into the partnership, we’re celebrating the launch of the digital collection with a drinks reception during the upcoming International Congress on the Enlightenment at McEwan Hall, Tuesday 16th July at 7:30pm. If you’re attending the conference, we’d love to see as many of you at the reception as possible, and please do stop by the Voltaire Foundation and Liverpool University Press stand and say hello during the week! 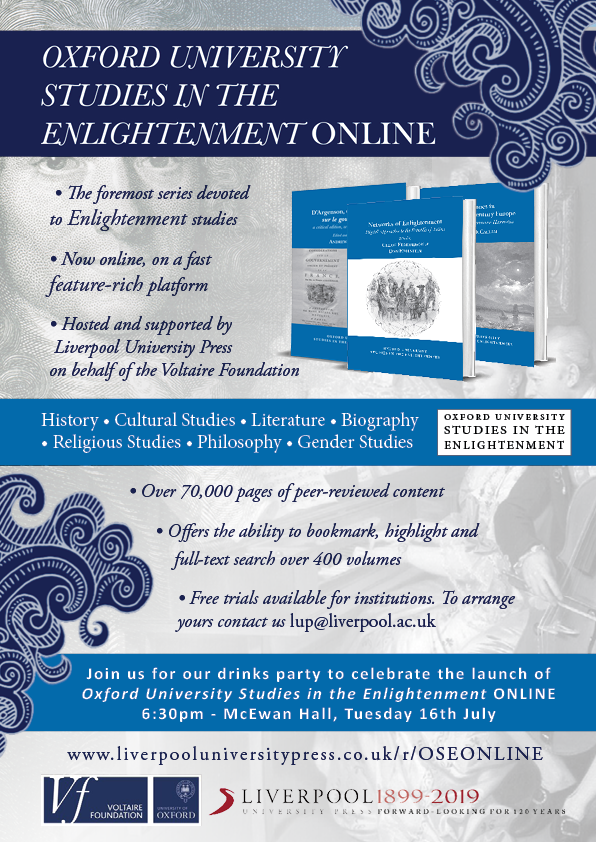