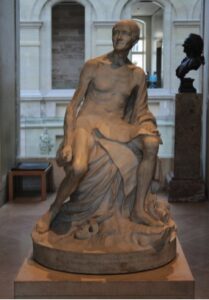 Jean-Baptiste Pigalle’s statue of a seventy-six-year-old Voltaire was commissioned by Mme Necker and other friends of the philosophe in 1770 and had the honour of being the first statue made of a living author. However, as many sarcastically commented upon its completion, it might as well have been modelled on Voltaire’s dead body: the artist’s decision to represent his ageing subject nude was heavily criticised to say the least.

Fréron, Voltaire’s long-time enemy, relished at the chance to declare Pigalle’s Voltaire nu ‘hideous’, writing on October 18, 1773, that ‘it is not really important that posterity can now count M. de Voltaire’s ribs, and know that he had very saggy nipples’ (il est assez indifférent que la postérité compte les côtes de M. de Voltaire, et sache qu’il avoit les mamelons tres alongés). A letter in the Mémoires secrets dated April 4, 1772, likewise condemns it for its revealing (but realistic) depiction of the old man’s body. It is hard to know where to put this statue, the author jokes, because it will ‘always be repugnant, especially to women, due to the hideous sight of an emaciated corpse, rather than a living being’ ([elle] répugnera toujours, sur-tout aux femmes, par le coup d’oeil hideux d’un cadavre décharné, plutôt que d’un être vivant). 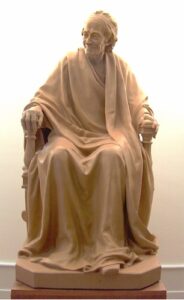 Faced with such open mockery, Voltaire tactfully included a complimentary poem to Pigalle on the subject of his statue in the Commentaire historique. Nonetheless, he ironically refers to the controversy it solicited by making the rather satisfied observation that it had displeased some of his most notorious enemies, namely Fréron and rival philosophe Jean-Jacques Rousseau. 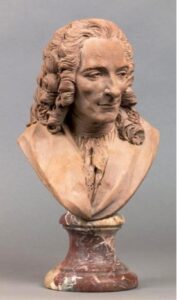 Despite Voltaire’s apparent satisfaction, Pigalle’s statue was widely agreed to be a bit of a dud, with Houdon’s less controversial (and less naked) Voltaire assis taking pride of place as the definitive representation of Voltaire in his twilight years. Lemoyne, the teacher of Houdon and Pigalle, had completed his own bust of a rather more youthful Voltaire in 1748. Lemoyne’s bust was also met with critical acclaim and conforms closely to the idealised popular image of the dashing, bewigged celebrity philosophe.

Other links of interest: