Voltaire opens his discussion of English natural philosophy by painting a picture of two completely different universes on either side of the Channel: ‘A Frenchman who arrives in London, will find Philosophy, like every Thing else, very much chang’d there. He had left the World a plenum, and he now finds it a vacuum. … In France, ’tis the Pressure of the Moon that causes the Tides; but in England ’tis the Sea that gravitates towards the Moon’. The reason for this schism, and the subject of Voltaire’s next four letters, was the revolutionary work of Sir Isaac Newton. 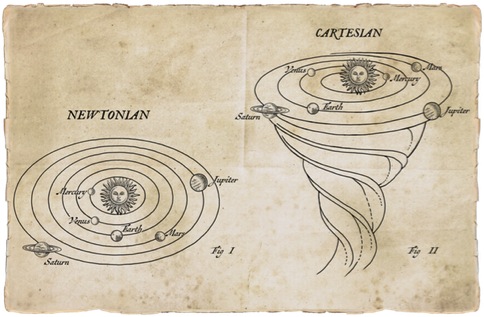 Voltaire had a deep sense of respect and admiration for Newton’s many achievements. The fact that Newton died and was memorialised during Voltaire’s stay in London (in the spring of 1727) undoubtedly had an impact on him, and likely motivated him in the exercise of vulgarising Newton’s philosophy for the French – a project that would continue into his collaboration with Emilie du Châtelet on the Eléments de la philosophie de Newton in the 1730s and ’40s. Newton is mentioned in passing earlier in the Lettres, in the discussion of the learned sect of antitrinitarians. In these letters, though, Voltaire aims to share with his compatriots the enormity of Newton’s contribution to our understanding of the universe. Letters XIV to XVII each address a different element of Newton’s discoveries: respectively, his model of the universe; gravitation; optics; calculus and astronomical chronology.

When Voltaire says that the Frenchman arriving in England ‘had left the World a plenum, and he now finds it a vacuum’, he is referring to two different ways of conceptualising the universe: Descartes’s and Newton’s. Descartes’s model was based on a purely mechanical understanding of physics, wherein nothing moved without being impelled (essentially pushed) to do so. On this model, the only way to explain the motion of planets and celestial bodies was to suppose that there must be some physical thing pushing them about. Because no such thing could be directly observed, Descartes inferred the existence of a ‘subtle matter’ that pervades the universe and serves this pushing function. This hypothetical matter was ‘subtle’ because humans could not directly detect it. Descartes theorised that subtle matter took the form of vortices, or eddies, in order to account for the orbital patterns of the planets. This is the plenum, or ‘fullness’ that Voltaire refers to: on the Cartesian model, the universe is filled with swirling matter that invisibly pushes around the matter that we can detect.

Newton rejected the idea of vortices, and theorised a fundamental vacuum or ‘void’ instead. His model relied on his discovery of the law of gravitation, according to which bodies attract other bodies as a function of their own mass, rather than bodies being impelled by omnipresent subtle matter. This is, broadly speaking, the model upon which modern physics still relies, although Einstein’s discovery of relativity and the later quantum revolution have modified the basic Newtonian model in some ways.

Voltaire is quick to point out that Descartes’s mistakes in no way negated the contribution he made to natural philosophy. He endeavours to show that Descartes swept away centuries of error that had built up in the scholastic tradition, which had tied itself in knots trying to substantiate Aristotle’s physics, and that this clean-up was a crucial preliminary step towards Newton’s revolutionary discoveries.

Another realm in which Newton made groundbreaking discoveries was optics. Using a prism, Newton showed that white light contained the whole spectrum of colours within it. Here again, he refined or corrected Descartes, by showing that light did not hover in the air, but travelled through space as rays, and that these rays bent in certain predictable ways: a phenomenon called refraction. These discoveries allowed him to make new progress in the development of magnifying instruments, including a powerful telescope that relied on reflection in addition to refractive lenses.

Newton famously clashed with Leibniz about who had discovered calculus: a branch of mathematics concerned with calculating change. Both men claim to have discovered it first, but it now seems that they discovered it independently of one another in the latter third of the seventeenth century, devising different styles for writing it down, and publishing their findings at different times.

Overall, Voltaire admired Newton’s dedication to reason, observation, and claiming only what could be empirically verified. Newton is known for a motto, hypotheses non fingo, or ‘I contrive no hypotheses’. By this he meant that unlike the scholastics, and the Malebranchians and Cartesians who later corrected them, who would come up with explanations in order to fill gaps in the information they had about the universe, Newton contented himself with being able to describe and formulise phenomena, without then feeling obliged to imagine what their ‘final causes’ might be.

Newton managed to establish a certain number of basic principles and equations that could together account for nearly all of what we could observe about the universe. But crucially he refused to speculate about what might underpin these principles. Hence the epigram with which Voltaire closes Letter XV: Procedes huc, et non ibis amplius – ‘Hither thou shalt go, and no farther.’ Newton’s dedication to experimental science rather than vain speculation has, of course, allowed later scientists to go much farther, as advances in technology and new discoveries have allowed them to build on Newton’s foundations.