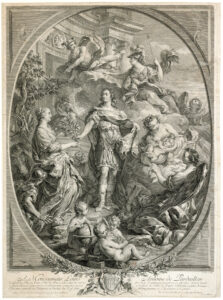 The Précis du siècle de Louis XV, originally designed by Voltaire to complete his ‘universal history’, is in many ways the most fascinating of his historical writings, and certainly one of the least known. In it we see him combining his techniques as a historian, honed during the writing of the Essai sur les mœurs and the Siècle de Louis XIV, with those of the contemporary eyewitness – the ‘on dit’ of the earlier histories becomes ‘Je le sais, j’y étais’.

Voltaire was sixteen years older than the king and would not have expected to outlive him. The Précis, then, is less a history than an account of Voltaire’s own world. For the early reign he draws heavily on the memoirs or letters of older men known to him personally, or through what we might today call his social network. For his years as historiographe de France from 1745 to 1750 his knowledge is greatly enriched by his access to a wide range of state papers and by direct dealings with his contemporaries. For the last twenty years of his life, he observes from a distance from his home at Ferney, relying on what he reads in the press, his voluminous correspondence and what he picks up in conversation from his many and varied visitors.

In the edition of his complete works of 1756 Voltaire places the Essai sur les mœurs, the Siècle de Louis XIV and the early chapters of what became the Précis du siècle de Louis XV in a deliberate sequence, following a plan set out some 10 years before. It is not until 1768 that he publishes the Précis as a work in its own right, adding to the existing chapters the Histoire de la guerre de 1741, of which an unauthorised edition had been published in 1755, and chapters covering the Seven Years’ War and the domestic politics of the later reign. To the edition of 1775 he adds a new chapter on the death of the king.

The Voltaire Foundation’s edition, in three volumes, is the first ever full critical edition, and includes, as a separate text, the Histoire de la guerre de 1741. The early printed editions and manuscripts have been carefully collated and thoughtfully presented, allowing the reader to glimpse Voltaire at work and follow his thought processes as he grapples with his material. The text is enriched with annotation and commentary, which elucidate Voltaire’s sources and the historiographical context in which he was working. It is completed with additional supporting material, including a newly discovered text by Voltaire relating to the War of the Austrian Succession, the Représentation aux Etats de l’Empire.