Between state and market

printing and bookselling in eighteenth-century France 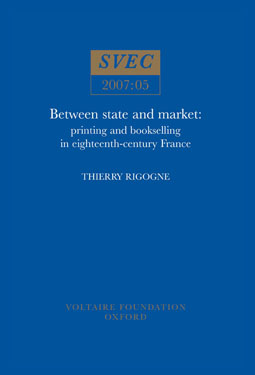 How did print spread through France to become a major force during the eighteenth century? This question has remained unanswered because we know surprisingly little about the infrastructure of the book trade. Between state and market: printing and bookselling in eighteenth-century France explores the networks of printers and booksellers that covered eighteenth-century France, situating these key cultural intermediaries within their political and socio-economic environments.

To draw an overview of printing and bookselling, and to chart their evolution across the century, the author analyzes a series of administrative surveys conducted between 1700 and 1777 by the Direction de la librairie. The hundreds of reports the central administration gathered on every printing shop and bookseller in the kingdom reveal not only where book professionals could be found and who they were, but what materials they were printing and what books they were selling.

Survey responses also show that book policing was deficient in most of the provinces, allowing pirated and forbidden books to pour into the kingdom from nearby foreign presses. Unable to control the circulation of books, the administration resorted to an austere Colbertist policy to restrict the number of printing shops. State intervention brought a decline in provincial book publishing, but printers could still thrive on job printing, local-interest publications and pirating. By contrast, the central administration let booksellers of all kinds proliferate, particularly in the second half of the century. Better suited than traditional printer-booksellers to supply whatever books readers wanted, retail booksellers cashed in on a booming market demand.

Examining the booktrade from each provincial city upwards, the author tracks the intricate web of relations between state, market, local institutions and book professionals that shaped the diffusion of print, and thereby the development of French literature and the experience of everyday readers.

[…] a clearly focused and disciplined study that opens up a much-debated field for fresh scrutiny that is not afraid to state where new and further research is needed.

Readers in these fields [book history and pre-Revolutionary French cultural history] will certainly appreciate the careful reconstruction of the organization and practice of the book trade at a key historical conjuncture.

A great many scholars have worked on the book trade under the Old Regime, including such eminent historians as Robert Darnton and Roger Chartier, but Rigogne’s study is the first one to offer a comprehensive, detailed, and empirically grounded view of the book trade throughout the French provinces at the height of the Enlightenment. Exquisitely detailed and backed up by an abundance of statistical data, Rigogne’s study exposes the yawning gap between royal policies on paper and their implementation in the provinces. It represents a major contribution to the scholarship on both Old Regime France and the history of the book.