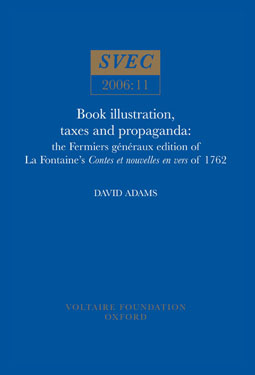 La Fontaine’s Contes et nouvelles en vers was probably the most famous illustrated book to have appeared in France during the eighteenth century. The celebrated 1762 edition, published by Louis XV’s detested tax-gatherers, the Compagnie des Fermiers généraux, held among its claims to supremacy its magnificent copperplate illustrations, designed by Charles Eisen. In this highly illustrated book, David Adams first sets out a publishing history of the edition, using historical, bibliographical and cultural evidence, and next provides a detailed study of the plates as a whole. In so doing, he gives his interpretation of the values and attitudes of the Compagnie, the members of which took great care to ensure that the plates reflected their view of contemporary society. Finally, he gives a synoptic view of the illustrations, and situates the work in the wider context of contemporary French illustrated books.
This pioneering study of the relationship between text and image in eighteenth-century France shows that the illustrations the Fermiers généraux commissioned for this literary classic were intended to promote their own patrician values, and to assert their freedom of action, turning literature into propaganda with consequences they did not foresee.

[This] book is both thoughtful and daring. Few authors possess the necessary erudition and methodological ingenuity to situate a work such as the 1762 Contes,/em> so suggestively within old-regime politics and finance. […] Adams succeeds in producing a book that says as much about the history of book illustration as it does about the larger cultural and political development of eighteenth-century France.

The Voltaire Foundation has produced a book of high quality not only in its content but also in its material presentation (with nearly 200 illustrations). This study will productively engage specialists working on La Fontaine, eighteenth-century culture, the history of the book, and the emerging field of text and image; indeed, anyone seriously interested in the relation between the visual and the textual should be familiar with it.