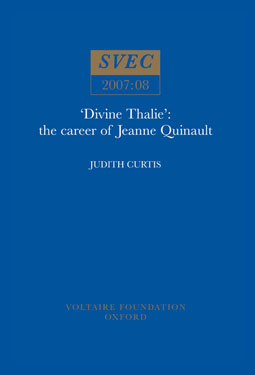 By convention, the likely end of the career of an eighteenth-century actress was marriage, the convent or the gutter. Jeanne Quinault used her talents to shape a most unconventional life. Despite her provincial origins, she was a favourite for over twenty years at the Comédie-Française and also carved an identity for herself in literary and salon life. Jeanne Quinault’s role as organizer of the société badine, called the Bout-du-Banc, is what has attracted the most interest, but historians have not generally recognized in her a salonnière as devoted to benevolence and mentorship as her wealthier and better-born contemporaries. From the time of her depiction in the pseudo-memoirs of Mme d’Épinay, the story has been distorted and errors have been handed down. This study offers a fresh assessment of her friendships with Caylus, Piron, Duclos, Maurepas and many other prominent individuals. In the theatrical sphere, Mlle Quinault promoted the development of sentimental comedy, sponsored both authors and actors, and participated in the creation of a number of works, including those of Françoise de Graffigny. Another client was Voltaire, whose letters shed light on the interplay between writers and performers. On a broader scale, the story of Jeanne Quinault is also that of the large acting family to which she belonged and of their aspiration to acceptance in polite society. Drawing on archival resources and unpublished collections of letters, this work offers readers the first detailed study of the actress and her circle. List of illustrations Acknowledgements List of abbreviations Introduction 1. The family established 2. The clan ascendant, 1718-1729 3. Private entertainments 4. Piron and Caylus 5. Voltaire and others, 1732-1741 6. Thalia in retirement: the Bout-du-Banc takes shape, 1741-1745 7. Loss and renewal, 1745-1746 8. Clients, friends and relations, 1747-1749 9. ‘Tant d’affaires’: from Cénie to a new Bout-du-Banc, 1749-1758 10. Old friends and new circles, 1758-1779 11. Passing into ‘history’ Conclusion Appendix: Jeanne Quinault’s reported theatrical roles List of works cited Index

Curtis’s historical narrative has the great advantage of providing an excellent overview of Parisian society in the eighteenth century.

The copious amount of information about the French actress and salonnière Jeanne Quinault compiled in this volume will appeal to scholars of French history, literature and cultural studies, as well as theatre.