the growth of an outstanding encyclopedia 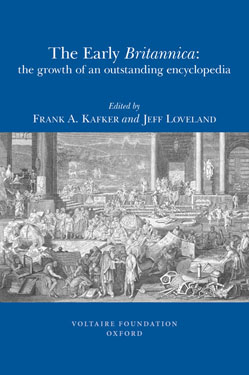 The Encyclopaedia britannica is a familiar cultural icon, but what do we know about the early editions that helped shape it into the longest continuously published encyclopedia still in existence?

This first examination of the three eighteenth-century editions traces the Britannica’s extraordinary development into a best seller and an exceptional book of knowledge, especially in biography and in the natural sciences. The combined expertise of the contributors to this volume allows an extensive exploration of each edition, covering its publication history and evolving editorial practices, its commentary on subjects that came in and out of fashion and its contemporary reception. The contributors also examine the cultural and intellectual milieu in which the Britannica flourished, discussing its role in the Scottish Enlightenment and comparing its pressrun, contents, reputation, and influence with those of the much more reform-minded Encyclopédie.

‘The contributors have conducted an extraordinarily thorough investigation of the Encyclopaedia britannica. […] They have unearthed valuable information about the editors and contributors to the first three editions and present compelling evidence about the range and treatment of their sources. This volume could greatly contribute to our understanding of the state of knowledge at the end of the eighteenth century.’

Epilogue: the tortoise and the hare: the longevity of the Encyclopaedia Britannica and the Encyclopédie compared, Frank A. Kafker

This collective effort produces extremely useful detail , marking the changing content of successive editions and thus giving clues to what was seen as novel or in need of revision. […] with its painstaking detail and awareness of the Scottish Enlightenment context, The Early Britannica: The growth of an outstanding Encyclopedia provides a valuable basis for future comparative work on the European encyclopedic project.