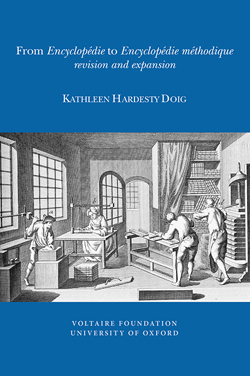 The last of the great Enlightenment encyclopedias, Charles Joseph Panckoucke’s Encyclopédie méthodique was originally conceived as an innovative revision of the Encyclopédie and the Supplément. Arranged in a series of subject-specific dictionaries, it began to appear in 1782 and was completed 50 years later, boasting 203 volumes of text and plates produced by many eminent editors and contributors. Kathleen Hardesty Doig’s book is the first to compare the genealogy of the Méthodique with its predecessors as a means to understanding Panchoucke’s original vision for his work. Through careful examination of each volume of the Méthodique, the author explores for instance:
• how Diderot’s materialist, anti-clerical articles were scrupulously preserved;
• how new contributions on religious topics, written by a renowned French theologian, provided a counter-balancing apology of Catholicism;
• how subjects were augmented or radically transformed, particularly in the sciences where articles reflect groundbreaking research in chemistry and medicine;
• how these changes illuminate the editors’ original goal of an encyclopedia designed to present information in an accessible format to specialists and amateurs alike.

‘This deeply researched work explores the construction of Panckoucke’s innovative enterprise. It sheds new light on the emergence and development of the disciplines as well as their respective boundaries and interrelations. The breadth of Kathleen Doig’s scholarship is remarkable.’
Robert J. Morrissey, University of Chicago

This book represents an important contribution to a growing body of scholarship comparing Diderot and d’Alembert’s Encyclopédie and its successor, Charles-Joseph Panckoucke’s Encyclopédie methodique.

Doig has captured in this book the very spirit of Panckoucke’s massive encyclopedia […]. She demonstrates with perspicacity and depth not only how the great Méthodique was written, but more importantly, how it should be read and, in turn, understood.

The British journal for the history of science

Kathleen Hardesty Doig has produced the first monograph studying the Encyclopédie méthodique in its entirety. […] applying qualitative and quantitative comparisons of content, [she] is more concerned with the Méthodique’s textuality than with its materiality.

‘Doig has produced an imposing empirical study whose large amount of detail makes it an indispensable tool for future studies of the Encyclopédie méthodique’.