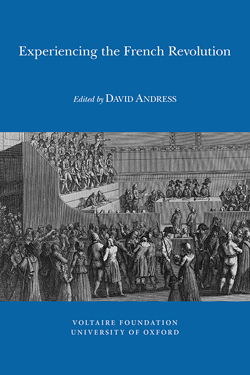 Recent debates around the French Revolution have questioned the need for an overall paradigm of interpretation, as the certainties underpinning both ‘classic’ and ‘revisionist’ views have faded. In Experiencing the French Revolution authors argue against a single ‘paradigm quest’, in favour of a plurality of approaches to underscore the diverse ways in which the turbulent changes of late eighteenth-century France can be explored.

From broad cultural trends to very personal trajectories, a team of experts offers fresh perspectives on the individual and collective experience of Revolution, both within and outside France. Using a range of methodologies, including biographical studies of key individuals and groups, archival studies of structures and institutions, and new sources available from digital humanities archives, contributors provide:
• new insights into the clandestine book trade of pre-revolutionary France, and the surprising effectiveness of Louis XVI’s state control
• a reappraisal of Robespierre, whose opinions were shaped and transformed by years of upheaval
• an exploration of how revolutionary situations inspired both dissent and discipline within the new citizen armies
• an analysis of the revolutionary shockwaves felt beyond France, and how its currents were exploited for national political ends in Belgium, England and Wales.

David Andress, Introduction: Revolutionary historiography, adrift or at large? The paradigmatic quest versus the exploration of experience.
I. Experiencing Revolutionary transitions
Simon Burrows, French banned books in international perspective, 1770-1789
Charles Walton, Between trust and terror: patriotic giving in Revolutionary France
Peter McPhee, Robespierre and violence
Mette Harder, Reacting to revolution – the political career(s) of J.-L. Tallien
Ian Germani, ‘The most striking and the most terrible examples’: the experience of military justice in the armies of the French Revolution
II. Experiences at the heart of the Terror
Alex Fairfax-Cholmeley, Defence, collaboration, counter-attack: the role and exploitation of the printed word by victims of the Terror, 1793-1794
Jonathan Smyth, Public experience of the revolution: the national reaction to the proclamation of the Fête de l’Etre Suprême
Ronen Steinberg, Trauma before trauma: imagining the effects of the Terror in the Revolutionary era
Marisa Linton, The stuff of nightmares: plots, assassinations and duplicity in the mental world of the Jacobin leaders, 1793-1794
III. Revolutionary experiences beyond France
Brecht Deseure, ‘Rappelez-leur, pour mieux les persuader’: French political legitimation and historical discourse in Belgium (1792-1799)
Ffion Jones, ‘The silly expressions of French revolution…’: the experience of the Dissenting community in south-west Wales, 1797
J. Ward Regan, Thomas Paine: life during wartime
Summaries
Bibliography
Index

‘An outstanding group of scholars at the cutting edge of current work on the seminal political upheaval of modern history demonstrates that attempts to reinvent overarching orthodoxies will always falter in the face of fresh empirical research.’
William Doyle, University of Bristol

‘[In his introduction] Andress describes the richness of this brilliantly textured volume as the product of a ‘pluralist academic culture’ (p.15). More exuberantly, one might call it fruitful anarchy: long may it continue.’

‘David Andress […] brings together several of the most creative historians currently working on the period of the French Revolution [and] is to be congratulated for assembling this useful and insightful collection of recent French Revolutionary research’.

‘[these essays] allow us to reflect on whether we can live with a variety of historical methods and how these can reveal both individual experience and the ‘social or cultural structures’ in which such ‘experiental worlds’ existed’.