the transformation of signs 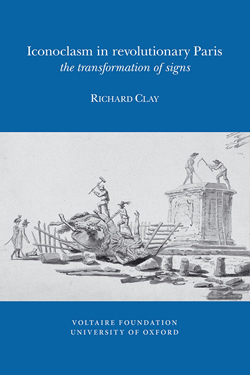 From Ancient Egypt to the Arab Spring, iconoclasm has occurred throughout history and across cultures. Both a vehicle for protest and a means of imagining change, it was rife during the tumultuous years of the French Revolution, and in this richly illustrated book Richard Clay examines how politically diverse groups used such attacks to play out their own complex power struggles.

Drawing on extensive archival evidence to uncover a variety of iconoclastic acts – from the beheading or defacing of sculptures, to the smashing of busts, slashing of paintings and toppling of statues – Clay explores the turbulent political undercurrents in revolutionary Paris. Objects whose physical integrity had been respected for years were now targets for attack: while many revolutionary leaders believed that the aesthetic or historical value of symbols should save them from destruction, Clay argues that few Parisians shared such views. He suggests that beneath this treatment of representational objects lay a sophisticated understanding of the power of public spaces and symbols to convey meaning. Unofficial iconoclasm became a means of exerting influence over government policy, leading to official programmes of systematic iconoclasm that transformed Paris.

Iconoclasm in revolutionary Paris is not only a major contribution to the historiography of so-called ‘vandalism’ during the Revolution, but it also has significant implications for debates about heritage preservation in our own time.

Meticulously researched and powerfully argued, this is a significant contribution to our understanding of iconoclasm at one of its most crucial historitical junctures.