The Lisbon earthquake of 1755 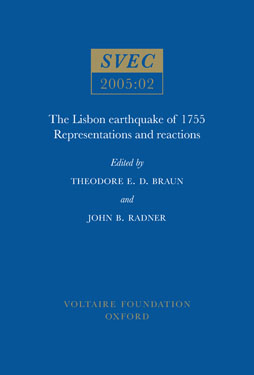 The most momentous natural disasters are not necessarily those with the most victims, but rather those producing the greatest shockwaves in intellectual history. The Lisbon earthquake of 1755 forced thinkers to re-engage with many of the greatest metaphysical and scientific questions of the day.

Humanity, claiming control of its condition through its search for knowledge, was confounded by its sudden and brutal reduction to the role of passive victim by an unpredictable and incomprehensible Nature. Reason and faith had been reconciled in their understanding and celebration of a divine law reflected and echoed by the laws of science, but the Lisbon earthquake shattered the euphoria of this reconciliation.

The debate was metaphysical and scientific, but it was also aesthetic, as the earthquake reopened interest in the sublime: everything that threatened man’s personal security, and that enthralled the imagination. Voltaire’s intervention made the earthquake one of the great dramas of the century. It even became a metaphor of the French Revolution, shifting the emotion from the trauma of a natural phenomenon to that of a political event. Casanova dreamed of a disaster that might raze the Doge’s palace, while Mercier was ambivalent in his Tableau de Paris, imagining a catastrophe capable of laying waste to Paris. Behind the obligatory pathos lay a veiled desire for regeneration through destruction.

This is the first major work in half a century to assess the Lisbon earthquake of 1755, both as it was represented at the time, and the reactions it provoked in large areas of western and central Europe, including Portugal, Spain, France, England, Germany, Switzerland, and the Netherlands. Topics considered include its coverage in the popular press, its social and political aftermath, the theological and scientific debates it engendered, as well as twenty-first century assessments of its causes and effects. Literary responses – both serious and parodic – are discussed, through the centuries up to our own time.

The chapters on history, politics, scientific debate, press coverage and illustrations are invaluable: well written and highly informative. These make up the majority of the volume, twelve out of eighteen chapters, and will be of interest to a wide variety of specialists from many disciplines. For that reason alone, I would recommend this volume highly. The four or so articles which deal specifically with Voltaire and his contemporaries will no doubt be of relevance to specialists in that particular field and are entirely appropriate in the context of his volume.

One cannot often say of a volume of scholarly essays that it makes for absorbing reading, but it is true in this case.

The anthology’s strength lies in the presentation of a multifaceted evaluation of the Lisbon earthquake, analogous to the international response it provoked in the eighteenth century.